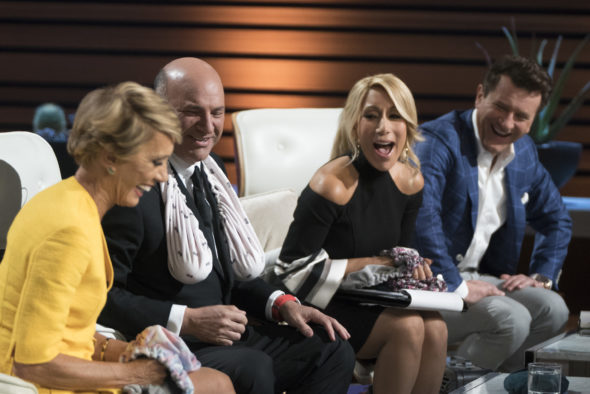 Are the sharks swimming with the fishes? Has the Shark Tank TV show been cancelled or renewed for an 11th season on ABC? The television vulture is watching for the latest cancellation and renewal news, so this page is a dedicated place to track the status of Shark Tank, season 11. Bookmark it, or subscribe for the latest updates. Remember, the television vulture is watching your shows. Are you?

The 10th season of Shark Tank averaged a 0.82 rating in the 18-49 demographic and 3.69 million viewers. Compared to nine, that’s down by 18% in the demo and down by 10% in viewership. Find out how Shark Tank stacks up against the other ABC TV shows.

Because Shark Tank is a competitive reality series, it costs less to produce than scripted TV shows, and the “sharks” invest their own money in the competitors’ concepts. It has been one of ABC’s best-rated reality TV series, but last year it dropped to about the middle of the pack. Will ABC cancel or renew Shark Tank for season 11? The ratings are down but I still expect this show will score a renewal. I’ll update this page with breaking developments, so subscribe for free updates on any Shark Tank cancellation or renewal news.

What do you think? Are you glad that the Shark Tank TV show has been renewed for an 11th season? How much longer should this ABC reality TV series last?

Yes I am glad they are coming back. Congrats!

I like it most of the time. Watch it most Sunday evenings….