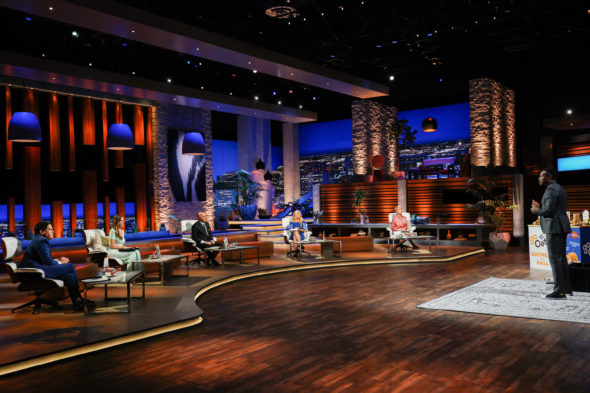 Can the sharks make deals at a distance? Has the Shark Tank TV show been cancelled or renewed for a 13th season on ABC? The television vulture is watching all the latest cancellation and renewal news, so this page is the place to track the status of Shark Tank, season 13. Bookmark it, or subscribe for the latest updates. Remember, the television vulture is watching your shows. Are you?

The 12th season of Shark Tank averaged a 0.68 rating in the 18-49 demographic and 4.17 million viewers. Compared to season 11, that’s down by 3% in the demo and up by 7% in viewership. Find out how Shark Tank stacks up against other ABC TV shows.

Will ABC cancel or renew Shark Tank for season 13? This series continues to do well for the network, is cheaper to produce than a drama series, and can be used to fill in holes in ABC’s schedule. I think it will be renewed once again. I’ll update this page with breaking developments. Subscribe for free alerts on Shark Tank cancellation or renewal news.

What do you think? Are you glad that the Shark Tank TV show has been renewed for a 13th season? How would you feel if ABC had cancelled this TV series, instead?

I am receiving txt msgs for products claiming to be backed by Shark Tanks “panel of investors.” Is this a common occurrence with viewers, and are the txt msgs legitimate?
Thank you!
Melani Bagley

Ok comment about? Shark Tank? I like the show and I think its a good idea in a couple months to have it virtual. That is what I read.

No thank you, done with it .

I still believe that Shark Tanks will return for the 13 seasons.