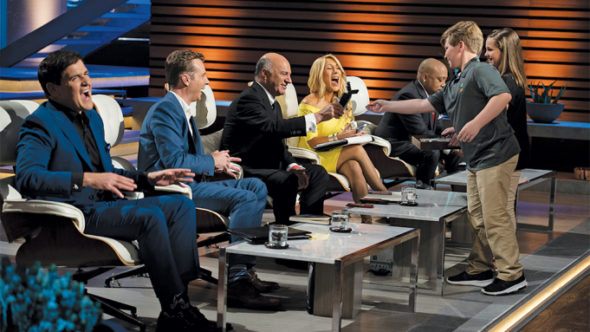 The Sharks are hungry for deals and Shark Tank is getting ready to film its 12th season. Episodes of this ABC series are typically filmed in Los Angeles but the new season will be filmed completely in Las Vegas due to the COVID-19 pandemic. The regular Shark investors are Barbara Corcoran Mark Cuban, Lori Greiner, Robert Herjavec, Daymond John, and Kevin O’Leary.

Deadline revealed the following about the production plan for the new season of the ABC series:

“I hear the show, already in pre-production at an undisclosed location in Sin City, is employing a quarantine bubble, keeping the stars and crew within a single facility with COVID-19 safety protocols, including testing, in place. I hear a large portion of Shark Tank‘s LA-based crew members have made the trip to Las Vegas to work on the new episodes, set to begin shooting soon.”

Due to the busy schedule of the Sharks, the series typically films 22+ episodes over the course of four weeks — two weeks in June and two in September. This speedy schedule lends itself to filming an entire season in a short amount of time while in quarantine.

A premiere date for the new season has not yet been revealed by ABC but, the network plans to launch season 12 in the fall and air it on Friday nights.

What do you think? Are you excited for the return of the Shark Tank series? Are you glad that it’s returning to Friday nights?

I love this Show but I want more entrepreneurs who are strong, positive and don’t cry.

The Tank is one of my favorite shows. I like all the sharks, even Mr. Wonderful.

I LOVE this show! I even watch some of the reruns that I missed in previous years! I look forward to watching current shows. Can’t wait til Fall. Love the cast…

No this show has run its course , I haven’t watched for at least 2 seasons now. Not interested.

This show is old and tired. Cancel it a.s.a.p.