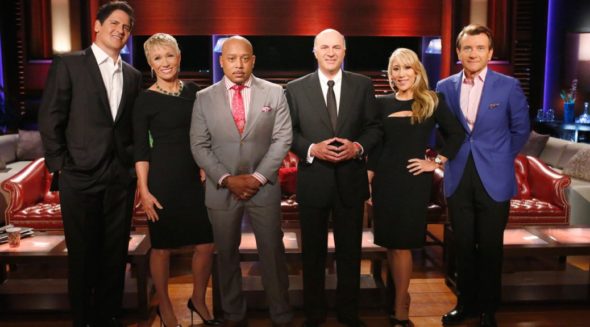 Is there blood in the water? Has the Shark Tank TV show been cancelled or renewed for a 10th season on ABC? The television vulture is watching for the latest cancellation and renewal news, so this page is a dedicated place to track the status of Shark Tank, season 10. Bookmark it, or subscribe for the latest updates. Remember, the television vulture is watching your shows. Are you?

A reality TV series on the ABC television network, Shark Tank features entrepreneurs seeking investments from a group of savvy, wealthy investors who are “self-made” tycoons. These regular “sharks” are Robert Herjavec, Kevin O’Leary, Barbara Corcoran, Daymond John, Mark Cuban, and Lori Greiner. They offer everyday people a shot at the American dream and the possibility of striking business deals beyond their wildest dreams.

The ninth season of Shark Tank averaged a 1.00 rating in the 18-49 demographic and 4.10 million viewers. Compared to season eight, that’s down by 15% in the demo and down by 21% in viewership. Find out how Shark Tank stacks up against the other ABC TV shows.

Because Shark Tank is a competitive reality series, it costs less to produce than scripted TV shows, and the “sharks” invest their own money in the competitors’ concepts. While its ratings have slipped over time, it remains one of ABC’s best-rated reality TV series, so they’ve moved it from Fridays to Sundays, which have been a Nielsen nightmare for the network. Although it premiered with higher numbers than last year, the ratings later dropped. Still, I expect this show will score a renewal. I’ll update this page with breaking developments. Subscribe for free updates on any Shark Tank cancellation or renewal news.


What do you think? Should ABC cancel or renew its Shark Tank TV show for a 10th season? How much longer should this ABC reality TV series last?

I think Shark Tank should continue indefinitely because it helps people with a dream to achieve it. Some of the products, etc. are really excellent. It is a wonderful platform to show what is possible to those watching and who want to become entrepreneurs themselves.

What happened to shark tank, did the executives of ABC want to constrain our viewing habits? Since streaming has become so popular, the major networks are trying desperately to stupidly change the tv schedule.