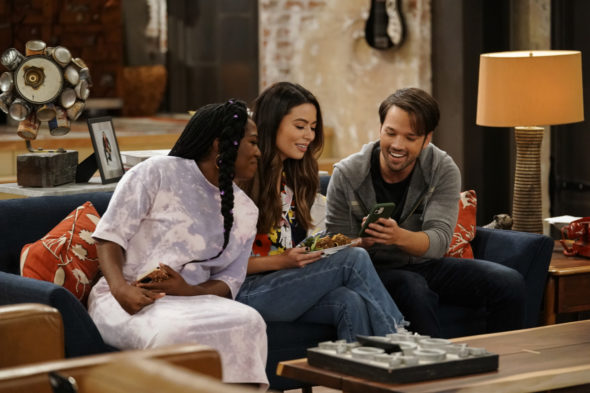 Carly and her friends are sticking around. The new version of the iCarly TV series has been renewed for a second season on the Paramount+ streaming service. Production on the new episodes will begin this fall.

A comedy series, the new incarnation of iCarly is a continuation of the original series (2007-12) that was created by Dan Schneider. It follows a group of best friends as they create a webcast for and about kids while grappling with everyday problems and adventures. The current comedy stars Miranda Cosgrove, Jerry Trainor, Nathan Kress, Laci Mosley, and Jaidyn Triplett. Picking up nearly 10 years later, it follows original influencer Carly Shay (Cosgrove), her brother Spencer (Trainor), and friend Freddie Benson (Kress) as they navigate work, love, and family relationships in their twenties. New characters include Harper (Mosley), Carly’s roommate and best friend, and Millicent (Triplett), Freddie’s snarky and social media-savvy stepdaughter.

Season One Now Streaming on Paramount+ in the U.S. and Canada with New Episodes Dropping Thursdays Exclusively for Paramount+ Subscribers

Paramount+, the streaming service from ViacomCBS, today announced that its new hit series, iCARLY, has been renewed for a second season in all markets the service is available, including the U.S., Australia, Canada, Latin America and the Nordics. Produced by Nickelodeon Studios, the new iCARLY series premiered in June on Paramount+ and quickly became one of the streaming service’s top acquisition drivers, ranking among Paramount+’s most-streamed titles since the series’ debut. Production on the second season will begin in Los Angeles this fall.

The new iCARLY series is executive produced by Ali Schouten and Miranda Cosgrove, with Schouten also serving as showrunner. Jerry Trainor and Alissa Vradenburg serve as producers. iCARLY was created by Dan Schneider. The original series ran from 2007-2012 on Nickelodeon.

Production of the new iCARLY series for Nickelodeon Studios is overseen by Shauna Phelan and Zack Olin, Co-Heads of Nickelodeon & Awesomeness Live-Action. Brian Banks serves as Nickelodeon’s Executive in Charge of Production for the series.

Season one, which is currently streaming in the U.S. and Canada, will debut in the Nordics and Latin America on July 30 and in Australia on August 11.

In addition to catching up on new iCARLY episodes, fans can also binge all five seasons of the original on Paramount+.

About Nickelodeon
Nickelodeon, now in its 42nd year, is the number-one entertainment brand for kids. It has built a diverse, global business by putting kids first in everything it does. The brand includes television programming and production in the United States and around the world, plus consumer products, digital, location-based experiences, publishing and feature films. For more information or artwork, visit http://www.nickpress.com. Nickelodeon and all related titles, characters and logos are trademarks of ViacomCBS Inc. (Nasdaq: VIACA, VIAC).

What do you think? Have you checked out the new iCarly TV series? Are you happy to hear that there will be a second season? Did you watch the original?

I absolutely love the new Carly !!! I am thrilled it’s back on and it’s as good as the first one except that Sam isn’t on there . It sucks she won’t be on and I think even though she’s not interested in coming back to acting they should make her an offer she can’t refuse . Her fans will sorely regret she’s not on there ! It’s good but could be phenomenal and mean so much more to us true fans if she’d just come back ! Have you ever wanted something soooo badly you can barely stand to… Read more »