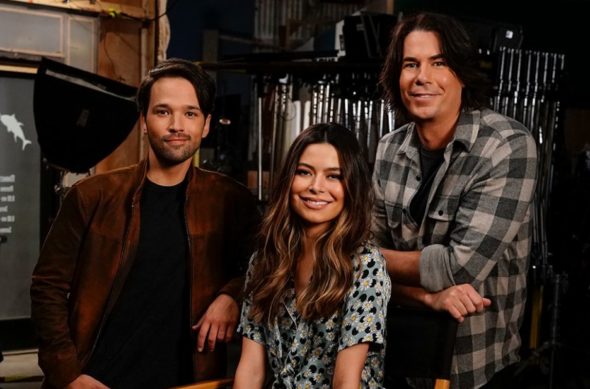 Nickelodeon has kicked off production on the upcoming revival of the iCarly TV series which has been ordered by the Paramount+ streaming service. Original show stars Miranda Cosgrove, Jerry Trainor, and Nathan Kress are returning and will be joined by new additions Laci Mosley and Jaidyn Triplett.

The new season picks up nearly 10 years after the original show ended, and finds Carly Shay (Cosgrove) and her friends navigating work, love, and their family in their twenties. The 13 episodes are expected to be released this summer on Paramount+.

Nickelodeon Studios and Awesomeness have started production on a new original series based on the hit sitcom, iCarly, for Paramount+. The 13-episode season picks up nearly 10 years after the original show ended, and finds Carly Shay, the original influencer, and her friends navigating work, love and their family in their twenties. Production on the new iCarly series has commenced in Los Angeles and is slated to premiere on the service this summer.

“Being on the iCarly set has always felt like a second home to me and it’s so awesome to be back with my pals Jerry and Nathan,” said Miranda Cosgrove. “We served up spaghetti tacos over 10 years ago, and I can’t wait to show you what we’re cooking up next with Nickelodeon for Paramount+!”

Nickelodeon’s original iCarly series, which ran from 2007-2012, followed a group of best friends as they created a webcast for and about kids their age while grappling with everyday problems and adventures. During its initial run, iCarly became a pop-culture staple and regularly broke viewership records among audiences of all ages. The original iCarly series was created by Dan Schneider.

The new iCarly series is produced by Nickelodeon Studios and Awesomeness (To All The Boys I’ve Loved Before, Trinkets, PEN15). The pilot is written by Ali Schouten (Diary of a Future President, Champions, Merry Happy Whatever), who also serves as executive producer, and Jay Kogen (Nickelodeon’s School of Rock, The Simpsons, Frasier). Miranda Cosgrove also serves as executive producer, with Jerry Trainor and Alissa Vradenburg serving as producers. The pilot is directed and executive produced by Phill Lewis (One Day at a Time, The Neighborhood).

About Awesomeness
Awesomeness, a subsidiary of ViacomCBS, is a media company focused on serving the global Gen Z audience through its digital publishing, film and television studio divisions. Awesomeness has become the destination for youth culture, cultivating a loyal audience with hit programming on the world’s biggest streaming services including Netflix (smash-hit film series “To All The Boys I’ve Loved Before,” Emmy(R) winner “Trinkets”) and Hulu (Emmy(R) winner “Zac & Mia”, Emmy(R) nominee “Pen15”), along with the company’s immensely popular short-form programs on YouTube (“Brent Rivera’s Dream Vacation,” “Twin My Heart,” “My Dream Quinceañera,” “VS”), that garner hundreds of millions of views. As a leading media brand, Awesomeness’ worldwide distribution footprint spans owned, social and premium SVOD platforms. Founded in 2012, Awesomeness is headquartered in Los Angeles, with additional offices in New York.

About Nickelodeon
Nickelodeon, now in its 41st year, is the number-one entertainment brand for kids. It has built a diverse, global business by putting kids first in everything it does. The brand includes television programming and production in the United States and around the world, plus consumer products, digital, location-based experiences, publishing and feature films. For more information or artwork, visit http://www.nickpress.com. Nickelodeon and all related titles, characters and logos are trademarks of ViacomCBS Inc. (Nasdaq: VIACA, VIAC).

What do you think? Are you looking forward to checking out the iCarly revival series? Did you watch the original version when it aired?

still such a shame about jennette mccurdy. looking forward to this show, hope its good.