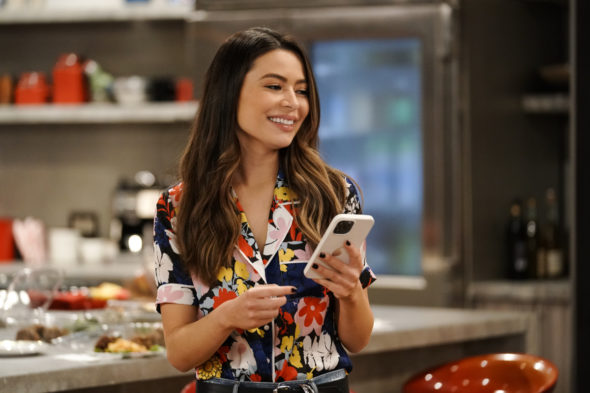 Will enough fans of the original Nickelodeon series tune in to this continuation? Has the iCarly TV show been cancelled or renewed for a second season on Paramount+? The television vulture is watching all the latest cancellation and renewal news, so this page is the place to track the status of iCarly, season two. Bookmark it, or subscribe for the latest updates. Remember, the television vulture is watching your shows. Are you?

Streaming on the Paramount+ subscription service, the new incarnation of iCarly is a continuation of the original series that was created by Dan Schneider. The 2007-12 show follows a group of best friends as they create a webcast for and about kids while grappling with everyday problems and adventures. The current comedy stars Miranda Cosgrove, Jerry Trainor, Nathan Kress, Laci Mosley, and Jaidyn Triplett. Picking up nearly 10 years later, it follows original influencer Carly Shay (Cosgrove), her brother Spencer (Trainor), and friend Freddie Benson (Kress) as they navigate work, love, and family relationships in their twenties. New characters include Harper (Mosley), Carly’s roommate and best friend, and Millicent (Triplett), Freddie’s snarky and social media-savvy stepdaughter.

Unless they decide to publicize viewership, it is difficult to predict whether Paramount+ will cancel or renew iCarly for season two. Since Paramount+ isn’t ad-supported, it can take a chance on TV series it believes in but sooner or later it comes down to production costs, versus viewership numbers. I think there’s a good chance that a good number of original series viewers will tune in out of curiosity. Some will keep watching while others will tune out but, overall, I think there will be enough interest to secure a second season. I’ll keep my ears open and an eye out for news, and will update this page with breaking developments. Subscribe for free alerts on iCarly cancellation or renewal news.

7/15/21 update: iCarly has been renewed for a second season.

What do you think? Are you glad that the iCarly TV show has been renewed for a second season? How would you feel if Paramount+ had cancelled this TV series, instead?