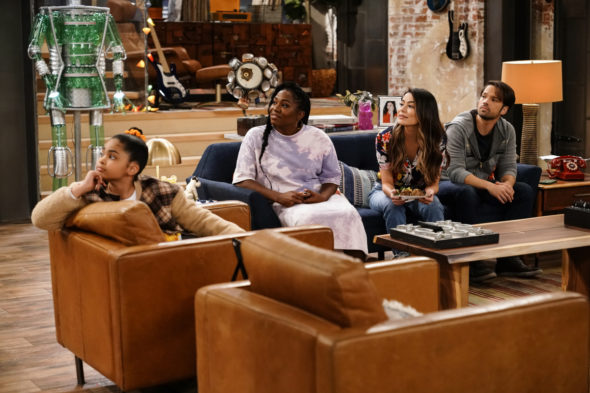 How is Carly Shay adjusting to adulthood in the first season of the iCarly TV show on Paramount+? As we all know, the Nielsen ratings typically play a big role in determining whether a TV show like iCarly is cancelled or renewed for season two. Paramount+ and other streaming platforms, however, collect their own data. If you’ve been watching this TV series, we’d love to know how you feel about the first season episodes of iCarly here.  *Status Update Below.

A Paramount+ comedy series, the new incarnation of iCarly is a continuation of the original series that was created by Dan Schneider. The 2007-12 show follows a group of best friends as they create a webcast for and about kids while grappling with everyday problems and adventures. The current comedy stars Miranda Cosgrove, Jerry Trainor, Nathan Kress, Laci Mosley, and Jaidyn Triplett. Picking up nearly 10 years later, it follows original influencer Carly Shay (Cosgrove), her brother Spencer (Trainor), and friend Freddie Benson (Kress) as they navigate work, love, and family relationships in their twenties. New characters include Harper (Mosley), Carly’s roommate and best friend, and Millicent (Triplett), Freddie’s snarky and social media-savvy stepdaughter.

What do you think? Which season one episodes of the iCarly TV series do you rate as wonderful, terrible, or somewhere between? Do you think that iCarly on Paramount+ should be cancelled or renewed for a second season? Don’t forget to vote, and share your thoughts, below.

*7/15/21 update: iCarly has been renewed for a second season on Paramount+.