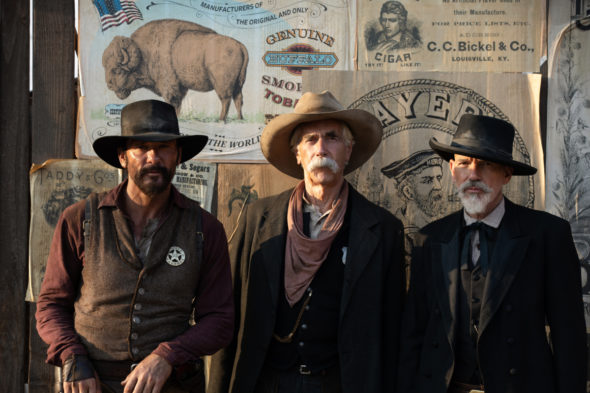 Will this prequel series be as successful as Yellowstone?. Has the 1883 TV show been cancelled or renewed for a second season on Paramount+? The television vulture is watching all the latest cancellation and renewal news, so this page is the place to track the status of 1883, season two. Bookmark it, or subscribe for the latest updates. Remember, the television vulture is watching your shows. Are you?

Streaming on the Paramount+ subscription service, the 1883 TV show is a prequel to Yellowstone. It stars Sam Elliott, Tim McGraw, Faith Hill, Isabel May, LaMonica Garrett, Audie Rick, Marc Rissmann, Eric Nelsen, and James Landry Hebert with Dawn Olivieri, Emma Malouff, Alex Fine, Gratiela Brancusi, Anna Fiamora, Amanda Jaros, Nichole Galicia, Stephanie Nur, Noah Le Gros, and Martin Sensmeier in recurring roles. Guest stars include Billy Bob Thornton, Graham Greene, and Tom Hanks. The story follows a previous generation of the Dutton family as they embark on a journey west through the Great Plain to establish what would eventually become the Yellowstone Ranch. It’s a stark retelling of Western expansion, and a study of one family as they flee poverty in Texas to seek a better future in America’s promised land — Montana.

Unless they decide to publicize viewership, it is typically difficult to predict whether Paramount+ will cancel or renew a show like 1883 for a second season. However, given the success of Yellowstone and the promotion and money that Paramount+ is putting into this prequel, I can’t imagine that it won’t be renewed. I’ll keep my ears open and an eye out for news, and will update this page with breaking developments. Subscribe for free alerts on 1883 cancellation or renewal news.

What do you think? Do you hope that the 1883 TV show will be renewed for a second season? How would you feel if Paramount+ cancelled this TV series, instead?

Besides being one of the best shows on TV since GOT, the music is simply gorgeous. Everything about this show is perfect. The narration is beautiful. The cast is amazing. Must have more seasons.

I thought it was great Sam Elliot Faith Hill Tim McGraw and the girl 5hat played vnb their daughter were great. The story was great cant wait to see more I actually enjoyed it more than Yellowstone! I was surprised at the great acting! Faith Hill was well adapted to her character iloved it!!!!!

Yes! Season 2 and maybe even more!

My husband and I think that 1883 is one of the best shows on television. Please give us a second season!!!

I’d be gutted if there’s no 2nd season,it’s one of those rare programs that you look forward to seeing each week and want it to go on and on, Long live the memories of the old west .

I will vote for a second season!

I think 1883 tv show is great. This show is the reason I got the Subscription to Paramount plus. If the 1883 show is cancel I would cancel Paramount plus.

Please renewed season 2. So good on paramount plus streaming. I can’t wait to watch next Sunday and Yellowstone original series.

I don’t have Paramont plus. Nor do I intend to buy it. So I won’t even watch the first episode on Paramont