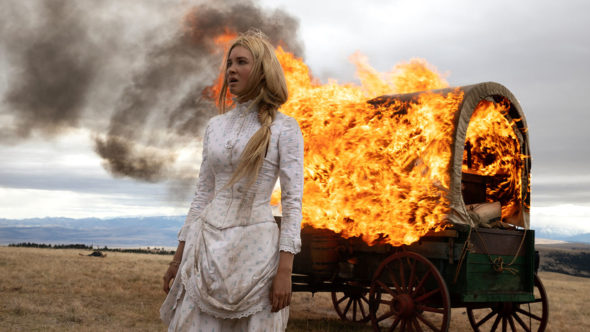 1883 made a big splash with its premiere on Paramount+. The series had the most-watched premiere ever on the streaming service. It also brought in 4.9 million viewers on Paramount Network on Sunday night, with its special premiere following Yellowstone.

Paramount+ revealed more about 1883 in a press release.

“Paramount+, the streaming service from ViacomCBS, today announced Sunday’s premiere of the highly anticipated Yellowstone prequel, 1883, broke a new record for the service as its most-watched original series premiere ever, up more than double over the previous record, across the service’s owned and operated platforms, with additional third party reporting still to come. In addition, the MTV Entertainment Studios and 101 Studios-produced series marked the most-social drama series Sunday night across streaming, according to data from Talkwalker Social Content Ratings.

In addition to its record-breaking premiere on Paramount+, the premiere also delivered 4.9 million total viewers during its special event on Paramount Network following Yellowstone, making it the biggest new series premiere on cable since 2015.

“The results of 1883’s debut are truly phenomenal,” said Tanya Giles, Chief Programming Officer, ViacomCBS Streaming. “The day one streaming numbers, coupled with the results of the linear sampling effort and social response from our audience, show the tremendous promise for this series. We look forward to continuing on this epic journey with our subscribers.”

“The success of Taylor Sheridan’s 1883 is another proof point of our unique model to leverage our linear platforms and franchise our biggest hits to supercharge Paramount+,” said Chris McCarthy, President and CEO ViacomCBS Media Networks. “We went big with 1883 – the Yellowstone prequel – and it delivered big and shattered all records, as both the #1 most-watched original series premiere ever on Paramount+ and the biggest new cable premiere since 2015, with nearly five million viewers tuning into Paramount Network Sunday’s airing. Given the tremendous viewership on Paramount Network, I’m confident our strategy of sampling on the Paramount Network will drive awareness and viewers to Paramount+.”

“Getting this show out to audiences in 2021 was an epic undertaking,” David Glasser, CEO of 101 Studios. “We were presented with an almost impossible set of circumstances but we achieved our goal in record-breaking fashion. That success is due to the dedication of the unbelievably gifted cast, crew, ViacomCBS and the passionate vision and leadership of Taylor Sheridan. 101 Studios could not be more proud to have worked alongside Taylor to shepherd 1883 into the world.”

Tracking ahead of Yellowstone S1 premiere on key demos:

5.5 million viewers for the premiere + simulcast

What do you think? Did you watch the premiere of 1883 on Paramount+? Do you plan to continue to watch the Yellowstone prequel?

Love, love, love Yellowstone. Not interested in 1883. Stop forcing it down our throats!!!!!

Not interested in paying more to see 1883. Not happy that they tease people as a ploy to get you to sign up and pay more for an additional channel that I do not have time for.

We are faithful fan of Yellowstone. We also watched the Premiere of 1883. It’s also a good show. But since it’s only a streaming show on Paramount, we will not pay the fees to watch. I hope Paramount does not do this to Yellowstone. Please keep it on regular channel.

No, while this program shows excellent promise, I REFUSE to pay for additional TV programming.

Just saw the first episode and liked it. I’ll wait and see if I’ll love it like Yellowstone. I may won’t see it if it’s streamed only on Paramount +. If so I’ll probably buy the 1st season on DVD when it comes out. Keep up the good work!!

Love Yellowstone and love the premiere of 1883 – my only issue is Paramount is not going to broadcast 1883 on Paramount – only the streaming service Paramount+ which is requesting a monthly payment. I can’t afford to pay for my Direct TV channels plus pay for additional streaming services. This unfortunately means that I won’t be watching 1883 anytime soon. Guess I’ll have to wait for the season to be over and hope that the shows will be available without requiring me to pay extra…. I’m paying for Paramount already, no money to pay for Paramount + also.

why can’t it be on regular tv?
they could make enough money from commercials

Some realistic, some not. Beginning scenes of robbers shooting at Tim McGraw maybe 20 times thru a covered wagon and not one shot connected. . unrealistic. I won’t pay to watch it. Not a fan of 6666 at all. . . Love Yellowstone.

Really like this show.
Will it stay on regular tv channels?

LOVE them both. Best thing on tv.