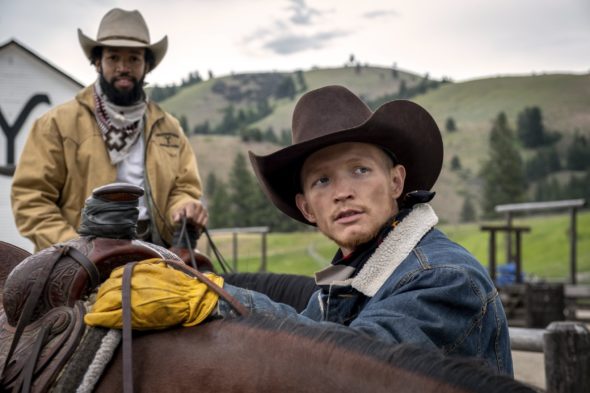 Can the Duttons keep control while keeping viewers coming back for more? Has the Yellowstone TV show been cancelled or renewed for a fourth season on Paramount Network? The television vulture is watching all the latest cancellation and renewal news, so this page is the place to track the status of Yellowstone, season four. Bookmark it, or subscribe for the latest updates. Remember, the television vulture is watching your shows. Are you?

The third season of Yellowstone averaged a 0.75 rating in the 18-49 demographic and 3.91 million viewers. Compared to season two, that’s up by 47% in the demo and up by 66% in viewership. Find out how Yellowstone stacks up against other Paramount Network TV shows.

We don’t have to worry about Paramount Network cancelling Yellowstone. The show’s already been renewed for a fourth season so fans can sit back, relax and watch the drama unfold. I’ll update this page with breaking developments. Subscribe for free alerts on Yellowstone cancellation or renewal news.

What do you think? Are you glad that the Yellowstone TV show has been renewed for a fourth season? How would you feel if Paramount Network had cancelled this TV series, instead?

If Yellowstone is Not continued I believe that would be the Worst mistake that writer ever made in his lifetime as Yellowstone is the most appealing program and dramatic series that I have ever followed in my lifetime.

November 7 premiere I can’t wait to watch it.

Very Good series. Can’t wait for the return. Please do not cancel the show. Thank you

Won’t watch due to so much usage of the F bomb! Maybe a better grasp of the English language for expletives

We love Yellowstone Would like to see it continue .

I want to know if there is going to be a season 5 with 10 episodes of Yellowstone and when is it going to be out for the public.

Love this series. Please keep this series on. Needs more advertising. I found out by word of mouth.

I HOPE WHO EVER HAS THE POWER TO KEEP OR CANCEL YELLOWSTONE LISTENS TO THE VIEWERS WHO KNOW A GREAT SHOW WHEN THEY SEE ONE. THE WRITERS ARE TOP NOTCH. THEY KEEP US WATCHING EVERY SECOND AND CAN HARDLY WAIT A WEEK TO SEE THE NEXT EPISODE. YOU HAVE WON THE LOTTO WITH YELLOWSTONE. PLEASE DON’T CANCEL IT. YOU WILL MAKE THOUSANDS OF FANS VERY LET DOWN AND SAD.
KEVIN COSTNER. IS THE CHERRY ON TOP!