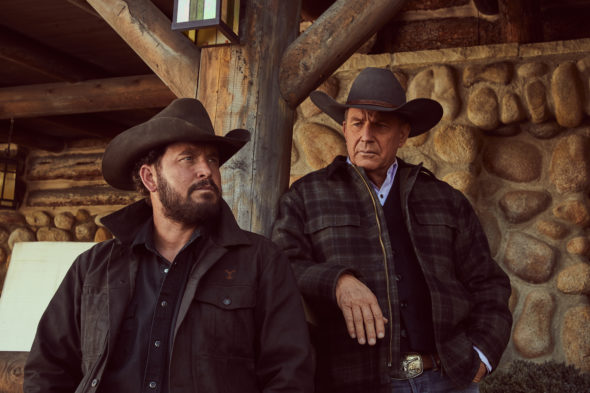 Is the Duttons’ future assured? Has the Yellowstone TV show been cancelled or renewed for a third season on Paramount Network? The television vulture is watching all the latest cancellation and renewal news, so this page is the place to track the status of Yellowstone season three. Bookmark it, or subscribe for the latest updates. Remember, the television vulture is watching your shows. Are you?

The second season of Yellowstone averaged a 0.51 rating in the 18-49 demographic and 2.31 million viewers. Compared to the first season, that’s up by 33% in the demo and 5% in viewership. Learn how Yellowstone stacks up against other Paramount Network TV shows.

We don’t have to wonder whether Paramount Network will cancel or renew Yellowstone for season three. The cable network picked up the third season on the day of the season two premiere. Since even renewals can be cancelled though, I’ll still keep an eye on the Nielsens and update this page with breaking developments. Subscribe for free Yellowstone cancellation or renewal alerts.

What do you think? Are you glad that the Yellowstone TV show has been renewed for season three? How would you feel if Paramount Network had cancelled this TV series, instead?

Gale Libra do not cancel

I love this show and have had withdrawals since it ended!
Yippee! Yippee, it’s coming back. I wish the new season would be offered on Netflix, Hulu
Or
Prime.
Can’t wait to see it again

excited to hear Yellowstone will have a 3rd AND 4th season. Just wish I knew the date for the start of season 3!!!

Love this show!!! Everyone I know can’t wait to see it. Please bring it back I need this kind of entertainment!!!!! All this reality shows are so bad so people are really loving this

We want Yellowstone renewed for at least third season

Please please Keep this series going. They have alot of crap on for the younger generation, but us older folks love a good series. Every time a Great series comes to us it gets cancelled. This is Great entertainment, Great cast. Husband and I and friends can’t wait for it to come on each week. We love Yellowstone!!

Best show in years… maybe ever. The cast is amazing. Cole is perfect.

Love this show! I do not watch a lot of TV because there is not much that is entertaining. Yellowstone keeps the audience waiting for more. The cast is great.