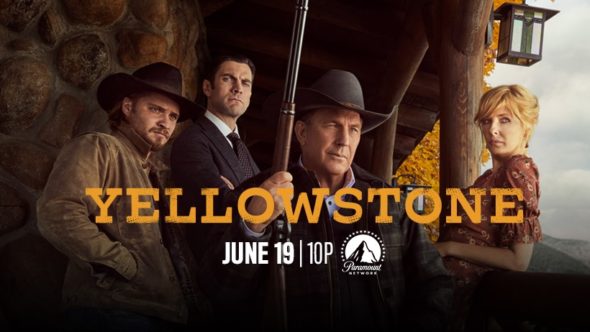 Don’t spend the season worrying whether Paramount Network will cancel or renew its Yellowstone TV show for a third season. The season three renewal came on the same day as the season two premiere. The rebranded Spike TV got off to a bit of a bumpy start last year, and Yellowstone was one of its better performers and received positive press, so the early pickup isn’t shocking. Now the series just has to prove it is worthy of the cable network’s faith. What do you think? Will Yellowstone be cancelled or renewed beyond season three? Stay tuned.

For comparisons: The first season of Yellowstone averaged a 0.38 rating in the 18-49 demographic and 2.242 million viewers.

What do you think? Do you like the Yellowstone TV series? Should Paramount Network have cancelled or renewed this TV show for a third season?

Spectacular in scenery and plots. The characters are really outstanding, each in their own way. This not just about Kevin Costner.

I don’t like this show I freaking LOVE IT! It’s so good on many levels; the acting, writing, the majestic scenery, the music. I never watch opening title songs but I watch this one every time. It’s so haunting and beautiful to see the art work is mesmerizing. It puts you right in the mood to watch what going to unfold during each episode. Beth is a stand out for me I adore her character so much. She’s fresh and unique, finally a woman with strength on TV. But I do love Kevin, Taylor and the actor that plays Rip… Read more »

Best series out there when there are so few worthy of watching.

Love the show, BEST new series out there. Wish there were more episodes per season. Can’t wait for season 3….