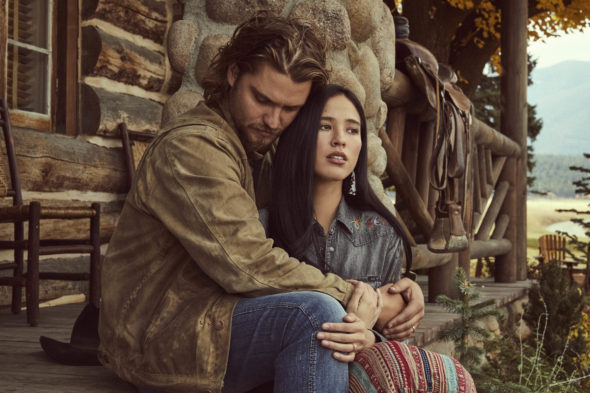 How are you enjoying the second season of the Yellowstone TV show on Paramount Network? As we all know, the Nielsen ratings typically play a big role in determining whether a TV show like Yellowstone is cancelled or renewed for season three. Unfortunately, most of us do not live in Nielsen households. Because many viewers feel frustration when their viewing habits and opinions aren’t considered, we’d like to offer you the chance to rate all of the Yellowstone season two episodes here.

What do you think? Which season two episodes of the Yellowstone TV series do you rate as wonderful, terrible, or somewhere between? Should Paramount Network have cancelled or renewed Yellowstone for a third season? Don’t forget to vote, and share your thoughts, below.

One of the best shows on TV. Good shows have great storylines but also have to have great characters who drive those stories to make them believable. Usually there are a few strong characters and some that are weaker but this show breaks that rule by having every single character carry their weight. Even the villans are played to perfection. Love it and sooo looking forward to the upcoming Season.

Finally a great production of a really great series. I am thrilled that there is going to be a third season. Looking foward to watching another exciting season that keeps you on the edge of your seat with drama and dynamics of the different characters and their personal struggles. I can’t wait until the season 3 release. Thanks for providing a good quality TV series.

The best TV show I have seen in years, Friends had been telling me about it and finally I binged 2 season in three days. I love the characters,they all play and important part and lesson as to the importance of show. I was a Deadwood Fan, A Longmire Fan, but this show they have really shown what it takes to keep what you love. Kevin Costner doesn’t say much, but what he says and then do, is worth it, and The character Rip shows what a true friend and a person you can always count on is all about.… Read more »

Excellent show, I just wish the seasons were longer with more episodes. I can’t wait for season 3.

Best show I’ve seen in a while. It has it all drama, romance, action, political you name it its there!

Yellowstone is awesome, my only problem is that its to short, we really need LONGER EPISODES AND LONGER SEASONS. I would also like the season finale to be more movie like (i.e. 2+hour season finale). Having to wait 8-9 Months between seasons is pure torture.

I absolutely love Yellowstone! The storyline is captivating and each episode is exciting to watch. Only pitfall is the seasons are too short!
I hope in season 3 “we viewers” are let on the reason why Beth hates Jamie so much. It’s been intriguing to watch however, it’s getting worn out with not knowing.

This has been the best show of the season. Cannot wait for season 3.
My whole family looks forward to the next chapter.

Yellowstone is just about the best show on TV

Yellowstone is the only thing on TV worth watching! On Wednesday nights, I record the episode, which an hour isn’t nearly long enough. I also watch it the same time I’m recording. Then watch it again about 1/2 hour later, fast forwarding thru the commercials! And then I watch it again at least once a day until the next Wednesday shows a new episode! Just don’t seem to get my fill of this show and all those cowboys! John Wayne was always at his best playing a cowboy! These guys don’t seem too far behind!! Love Yellowstone! Love Rip! Please… Read more »

I agree with everything said, it’s the best show on TV. I look forward to every Wednesday.

This show is fantastic! The first episode of season 2 seemed like it was over in minutes. So exciting.

This is absolutely the best series in a a very long time thank you for renewing for season 3 I have something to look forward to .