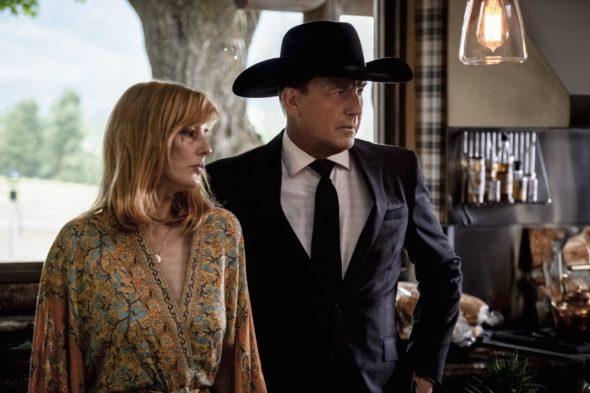 Airing on Paramount Network, the Yellowstone TV series saw its ratings go up between its first and second seasons. As a result, the cable channel has already renewed the series for a fourth season. Has the show peaked or, will the ratings continue to rise in year three? Could Yellowstone still be cancelled? Stay tuned.

For comparisons: Season two of Yellowstone on Paramount Network averaged a 0.51 rating in the 18-49 demographic and 2.36 million viewers.

What do you think? Do you like the Yellowstone TV series on Paramount Network? Should it be cancelled or renewed for a fourth season?

Really a great show, one of the best I have ever seen, let’s hope it lasts many years.

I love the series of yellowstone keep the show coming

I have loved this series since the first season. I really hope this series makes it many years. The story line and characters leave you wanting more each week. LOVE LOVE LOVE

I became HOOKED after the first episode, binged watched the rest of the first season o
In one day. Now I got my fiancé hooked! Hope the show lasts long past season four!

Best show on the air. All shot on site, mesmerizing scenery and storyline. I love Yellowstone. Can’t wait to See What happens! No way I’d miss this!

BEST SHOW ON TV – I just got my daughter and husband to stream season 1 last night – they blew through 5 episodes! They were reluctant to watch it but of course now they are hooked! Costner is fantastic – love all the characters

This neo- western drama intensity makes “the godfather” trilogy likened to a kiddie show. The story line is very compelling- the acting is superb. I got hooked during the 1st season & have clung on
The modern cowboy life is much more complex than I suspect for those who paved the trails into the wild west…

Thought June 21st would never get here. Terrific show. Kevin Costner at his best, at the top of his game. A fantastic, thrilling, spellbinding one hour that goes too fast. So enjoying Season 3 and ecstatic already for Season 4’s renewal. Congratulations cast and crew of YELLOWSTONE !! THANKS KEVIN. YOU’VE ALWAYS BEEN AN AWESOME WRITER.
Been watching you since Silverado !! Thanks for all your wonderful movies.

Oh yes renew for a fourth season. The best show on tv