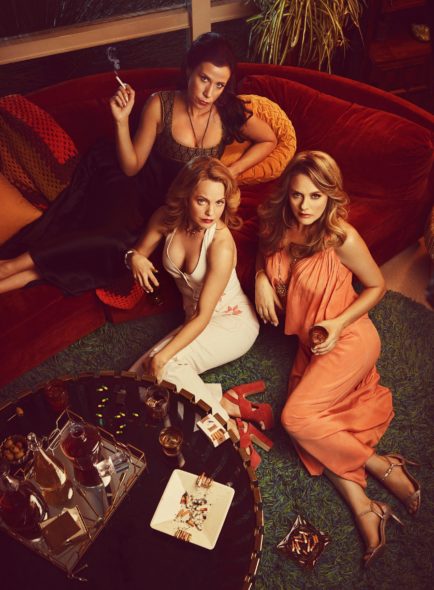 Is Bonnie going to make it after all?  Has the American Woman TV show been cancelled or renewed for a second season on Paramount Network? The television vulture is watching all the latest cancellation and renewal news, so this page is the place to track the status of American Woman season two. Bookmark it, or subscribe for the latest updates. Remember, the television vulture is watching your shows. Are you?

A Paramount Network dramedy, based on the childhood of Kyle Richards, American Woman stars Alicia Silverstone, Mena Suvari, Jennifer Bartels, Makenna James, Lia McHugh, Cheyenne Jackson, James Tupper, Diandra Lyle, Tobias Jelinek, Jonathan Chase, and Sam Morgan. The series centers on Bonnie  Nolan (Silverstone), a single mother of two daughters. Second-wave feminism is on the rise, and the sexual revolution is in full force, when the heroine discovers her husband, Steve (Tupper), is having an affair. Now, Bonnie has to figure out how to make it on her own, with a little help from her friends, Diana (Bartels) and Kathleen (Suvari).

The first season of American Woman averaged a 0.11 rating in the 18-49 demographic with 364,000 viewers. Learn how American Woman stacks up against other Paramount Network TV shows.

Will Paramount Network cancel or renew American Woman for season two? It’s hard to say if this show’s ratings are good enough for this newly branded cable channel. Since Paramount execs are trying to build up their stable of shows, I think American Woman will be renewed. I’ll keep an eye out for breaking developments. Subscribe for free American Woman cancellation or renewal alerts.

What do you think? Were you hoping that the American Woman TV show would be renewed for season two? Are you sorry that Paramount Network cancelled this TV series, instead?

Please bring this show back! This is the second time I’ve watched season 1, it just needs a big release on Netflix & boom you will definitely catch your audience, excellent cast & great story line so far & the era is my favourite mid Century lover.

I liked American woman. maybe I was a minority of one, however was one of my favorite tv shows & I don’t usually like serial tv, as I am not dedicated every week to watching.
try to get w/another network. please. good show. well acted, good cast.

This was a pretty decent show, sad to see it got cancelled. Was written well w/ great acting . This bites

I am upset to hear that American Wonen Season 2 is being canceled.. I loved this show and was looking forward to another season, I hope they decide to bring it back.. I can actually relate to the life one of the women…

Very poor decision by canceling this show after only 1 season. Many friends, family & coworkers are extremely disappointed. Realistic storyline that occurred in the 60’s in which many Americans were able to relate to.
Very unfair to leave fans hanging rather than complete season 2 and tie up some loose ends.

VERY POOR DECISION BY CANCELING THIS SHOW AFTER ONLY ONE SEASON!
MANY FRIENDS AND FAMILY MEMBERS INCLUDING CO-WORKERS ARE EXTREMELY DISAPPOINTED.
REALISTIC STORYLINE FROM THE 60’s IN WHICH MANY AMERICANS CAN RELATE TO.
Also,VERY UNFAIR TO LEAVE US HANGING WONDERING WHAT WAS TO HAPPEN.
HEY NETWORK; THE RIGHT THING TO DO WOULD HAVE BEEN TO COMPLETE SEASON TWO AND TIE UP LOOSE ENDS

Just read that American Woman was cancelled? I HATE network execs. They make some of the most stupid decisions! Can’t you people (network execs) have a little patience and wait for an audience to build before pulling the plug? The ratings aren’t so valid anymore with so many people viewing On Demand or binge-watching DVR recorded shows. The American Woman storyline is fantastic! The acting is great too. Give it a chance to grow! It’s a fabulous show and I believe most people who have watched it want more…as in more episodes, more seasons. Frankly the network didn’t do a… Read more »

Disappointed this show was not picked up again. Even more frustrated with the way networks just leave viewers hanging,e.g. Is Diana pregnant;What will Kathleen do;will Bonnie face more challenges. This happens all the time. Tyler Perry had a great show Too Close To Home) going on TLC and after 2 seasons it got canceled and let the audience hanging as to what happened. Wrap up the damn shows and stop leaving us guessing!

Super disappointed that this show wasn’t picked up for season 2. Thoroughly enjoyed the first season, even took the time to find the random network using my Roku.

I love American Woman, my Husband actually liked it also, I hope it gets picked up for season 2,3,4, etc. Hurry I can’t wait to see what happens next

It keeps getting better and better!! This final episode was so cool and the ending where Bonnie walks out of tbe store feeling great about herself and she gets on the bus with the Stones singing Can’t Always Get What You Want, was just the cherry on top!! Left me inspired and feeling empowered!

Love, love American Woman, please renew. I grew up in the 70s so I identify with Bonnie and the girls. I was a single mom and identity so much with Bonnie. I am a 71 year old hippie and I know many sexy seniors watching American Woman who also love it. PLEASE RRNEW

Me too!!! I soooo want it renewed with longer episodes!

Please renew American Woman!i love this show! I could watch an hour long one. Love it so much! So different from everything else and the casting is superb!