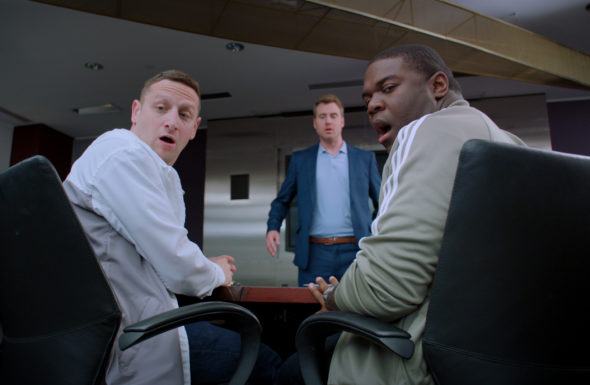 What’s shaking in the Motor City? Has the Detroiters TV show been cancelled or renewed for a third season on Comedy Central? The television vulture is watching for the latest cancellation and renewal news, so this page is the place to track the status of Detroiters season three. Bookmark it, or subscribe for the latest updates. Remember, the television vulture is watching your shows. Are you?

The second season of Detroiters averaged a 0.14 rating in the 18-49 demographic and 268,000 viewers. Compared to season one, that’s down by 33% and 27%, respectively. Find out how Detroiters stacks up against other scripted Comedy Central TV shows.

Will Comedy Central cancel or renew Detroiters for season three? The ratings are way down so I’m thinking there’s a good chance this show will be cancelled. I’ll keep an eye on the Nielsens and update this page with breaking developments. Subscribe for free Detroiters cancellation and renewal alerts.

What do you think? Were you hoping that the Detroiters TV show would be renewed for season three? Are you sorry that Comedy Central cancelled this TV series, instead?

This show is brilliant! It’s cleverly written and witty! I’ve watched both seasons at least twice. It is true to. Detroit culture and Tim and Sam’s relationship is so genuine and funny. This show funny. Extremely entertaining. Please bring it back for a 3rd season.

I love the Detroiters! I’ve watched it for both seasons and can’t get enough! Please renew this funny show for another season!! Thanking you in advance!