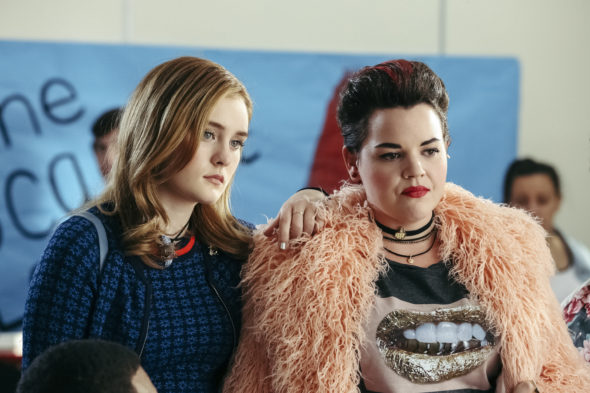 The Heathers TV show is finally coming to the screen. Variety reports Paramount Network will air an edited version of the cancelled series. Certain scenes have been edited out so the 10 episodes have been condensed down to nine installments.

Based on the 1988 film, the dark comedy is set in the present day and follow Veronica Sawyer (Grace Victoria Cox), a girl dealing with her own group of vicious Heathers. The cast also includes Brendan Scannell, James Scully, Melanie Field, Jasmine Mathews, and original movie star Shannen Doherty.

As reported earlier, Paramount Network cancelled Heathers before the show even got a chance to premiere. Now, the network says they will air the series over the course of five days beginning October 25th.

I am beyond excited that American audiences will finally get to see ‘Heathers.’ Obviously I wish fans could see the tenth episode but the producers and I felt strongly about not changing anything in it, and so, it’s been considered too controversial for U.S. audiences. Still, every day at this job is a delightful dream so it’s hard to complain. Plus, what matters most is fans will now get to see the satire we all love so much.”

This is the reason people pirate stuff. Why should the American Audiences see an edited version of the show and even miss an episode. I am glad I downloaded it and was able to watch all 10 Episodes. If I was watching this on TV and found out I was missing an episode I would be angry at the Station for leaving out an episode because it was too controversial. Let us decide if it was or was not. I do not need the Media Companies Dictating what I find controversial. If it gets too controversial then I as a… Read more »