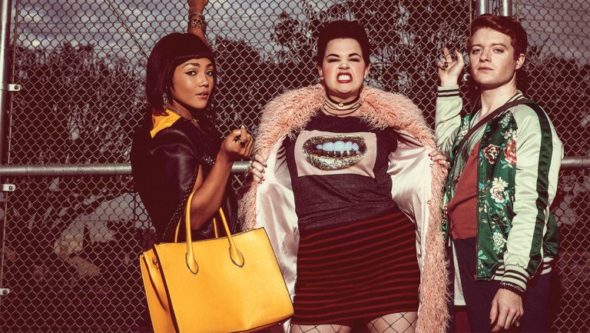 If you’ve been waiting to watch the Heathers TV show, you may have a long wait ahead of you. Paramount Network has decided to scrap the “pitch-black comedy anthology series” before it ever saw the light of day. On the plus side, they are actively trying to find a new home for the show.

A satirical reboot of the 1988 feature film of the same name, Heathers was described this way:

Heather McNamara (Jasmine Mathews) is considered the nicest Heather in the group who lives in the shadow of the others. She’s hiding a dark secret that she doesn’t want to be exposed. JD Dean (James Scully) is the new boy in town with a dark side and sets out on a reckless path of destruction proving that no one, even his girlfriend Veronica is safe.

A different version of the show was developed for Viacom’s TV Land and a pilot was shot in November 2016. In January 2017, TV Land ordered the current version. A couple of months later, it was revealed that the show was moving to the not-yet-launched Paramount Network with an eye on a 2018 launch.

Heathers was supposed to debut in March of this year but was delayed due to the Parkland high school shootings. A July 2018 premiere was considered but then, the Santa Fe high school shootings occurred. Paramount has now decided to completely scrap their plans to air the series but will actively work to find a new (not Viacom) home for Heathers. According to THR, multiple cast members are relieved that Heathers won’t be airing soon.

Keith Cox, Paramount Network president of development and production, spoke to THR about the decision not to air the series.

Walk us through the decision to scrap Heathers.

To be clear, I love this series and I believe in the franchise. It’s an anthology and was unique for us. The goal is not to scrap it but sell it. We shot this in November 2016 for TV Land. We’ve been working on this for a couple years. The cultural landscape has changed so fast. After Parkland, we as a company — which I applaud — we were in unison with the National School Walkout and went dark for 17 minutes [across all Viacom channels]. We were going to air and we paused that. It was the right thing to do — Viacom’s brands are youth brands. We have a unique relationship with youth and this movement after Parkland was so big and kept growing and we’ve been a partner in that. We were going to air in March and hit pause and then had Santa Fe. We knew we were doing a very bold show that pushes boundaries. It’s a satire but it’s very bold. We knew that and then this movement happened and we as a company applauded that movement. This was a very difficult decision. We had multiple meetings, and in the end, we didn’t feel comfortable right now airing the series and I’m not sure when there might be a time that we as a youthful brand at Viacom would feel comfortable. That said, we are very diligently trying to sell this because we believe in the show.

How much of this decision was based specifically on the content: the season ends with the high school being blown up, which is similar to the movie’s ending. We’ve heard the decision came from Viacom CEO Bob Bakish, as you, Kevin Kay and other insiders there all wanted to air it and clearly believe in the show.

We’re aware of the movie, which was done pre-Columbine. In the end, we didn’t want to butcher the show or make it something that it’s not, which isn’t fair to the writers, producers and cast. The goal is to sell it and keep the franchise alive. We’ve had discussions with corporate people. But this is something we’ve all talked about. I love the show. This is a high school show, we’re blowing up the school, there are guns in the school, it’s a satire and there are moments of teachers having guns. It’s hitting on so many hot topics. This company can’t be speaking out of both sides of its mouth, saying the youth movement is important for us and we’ve done all these wonderful things to support that and at the same time, we’re putting on a show that we’re not comfortable with. That would be in conflict. We’ve had 20 meetings on this. We knew the show we were making, we made it two years ago. We were excited to go there with some of the bold topics. Even the movie was done at a time before the culture changed. We want to do risky and bold shows that push buttons and we will; it has to be great. Heathers was shot beautifully with a great cast and we’re proud of the show. It’s a high school show, it’s got elements that young kids today are aggressive in trying to change and we as a company are with them on that. We paused it once and we just don’t feel comfortable airing it.

SEASON TWO SPOILER ALERT Production on the first season was completed quite awhile ago and the writers room has nearly completed working on the second season. Word is that season two would be tied to the first season but would involve a new location. THR sources say that it would be set in the 1700s and revolve around Marie Antoinette — with many of the key cast members returning in new roles.

Cox hints, “Season two is not set in high school but it’s still bold and pushing boundaries. But you really need season one for season two to make sense; you can’t flip them. There is some connective tissue, so to speak, without giving away too much.” END SPOILER ALERT

What do you think? Are you disappointed that Paramount has decided not to air the Heathers TV show? Does it sound like a show that you’d like to watch when/if it airs elsewhere?

i don’t understand this article. I have episodes 1 thru 6 in my possession. I don’t know the story behind the remaining 4 episodes. BTW, I am really enjoying it. I think it is very well done. If anyone reading this has any more info on the show, (ie; developments, release dates, how i can get the other 4 eps,etc)Please comment below.

You can find all the episodes here~ I just binge-watched them and omg I love it XD;;; I don’t think people get that it’s an incredibly dark satire, lol~ But yeah~ check out the rest here: http://putlockers.plus/watch/gdVN6pdD-heathers-season-1.html

Amazing that they have nearly 2 seasons written and they decided to scrap it now. I wasn’t going to watch it anyway, but they did all that work done for nothing. I have no idea who would pick it up.

Fingers Crossed nobody picks it up.

I agree, although I think the Marie Antoinette season 2 sounds interesting. I’d love them to completely scrap season 1 (which sounded and looked like a truly terrible idea way before all the school shootings) and just air season 2 (“connective tissue” be damned).