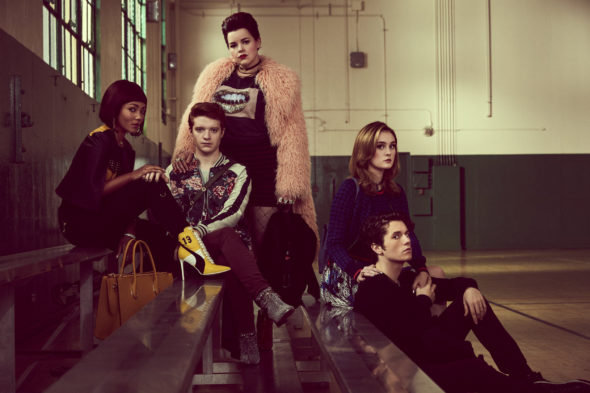 Set in the present-day, Heathers centers on Veronica Sawyer (Cox), who must deal with a vicious popular clique, “The Heathers.” Heather Chandler (Field) is the fashion-savvy leader of the pack. Her reign over Westerburg High is one rife with fear and intimidation.

Sidekick Heather Duke (Scannell) serves as clique lieutenant and enjoys wielding Heather C’s power to destroy anyone who does not live up to his exacting standards. Meanwhile, Heather McNamara (Matthews) is the nicest of the Heathers, and languishes in their shadows, perhaps because she has a dark secret and cannot risk exposure.

Finally, there’s JD Dean (Scully), the new boy in town. He gives a whole new meaning to having a dark side. It is JD who engineers a chain of destruction that threatens anyone and everyone. Even his girlfriend Veronica isn’t safe.

Originally imagined as TV Land anthology drama, the series had a rocky road to the air. In the course of shuffling programming across its various networks, parent-company Viacom first scheduled Heathers to premiere on Paramount Network in March of 2018. After the St. Valentine’s Day gun massacre at Parkland, Florida’s Marjory Stoneman Douglas High School though, the network decided to delay it until July.

In the wake of the May 18, 2018 Santa Fe High School shooting in Texas, Paramount announced in June that although writing on the second season of Heathers was nearly complete, they were cancelling the show and would shop it around. By early October, the network reversed course and announced an edited version of Heathers season one would air as a binge-a-thon on five consecutive nights, and that some content had been edited out of the first season, which reduced its episode count from ten to nine.

What do you think? Do you like the Heathers TV series? Should this Paramount Network TV show be cancelled or renewed for another season?