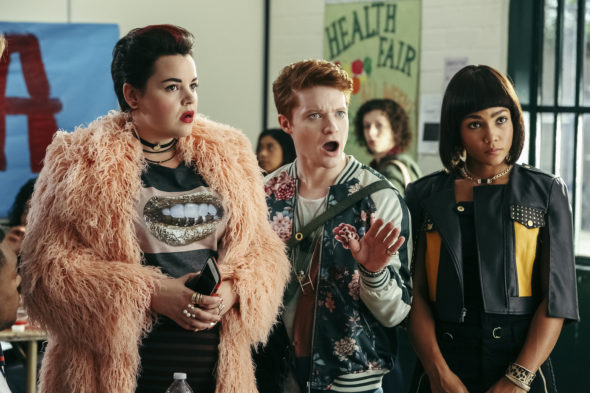 How very. Paramount Network has finally rescheduled the premiere date for its Heathers — the TV show adaptation of the 1988 feature film, which starred Winona Ryder and Christian Slater. The series was originally supposed to premiere in March, but was postponed after the Valentine’s Day gun massacre at Parkland, Florida’s Marjory Stoneman Douglas High School. Now, the first season of Heathers will debut Tuesday, July 10, 2018, at a time TBA. Watch the video announcement, below.

An hourlong dark comedy, Heathers stars Grace Victoria Cox as Veronica Sawyer and James Scully as JD. The Paramount Network cast also includes Melanie Field as Heather Chandler, Jasmine Mathews as Heather McNamara, and Brendan Scannell as Heather Duke. Shannen Doherty, who played the latter role in the movie, is set as a Heathers season one guest star, as are Selma Blair and Casey Wilson.

Yesterday, the network hinted, on the show’s official Instagram account, that today would be the day it revealed the Heathers series premiere announcement.

What do you think? Are you looking forward to the Heathers TV show adaptation? Do you think this story will work well as a series, or is it better suited to film? Let us know, below.

I expect that this will be axed after 4 eps.