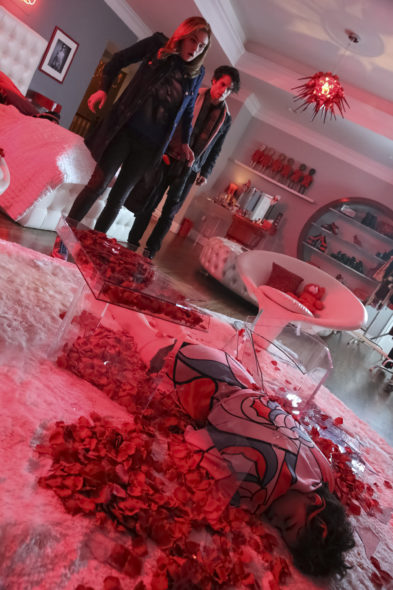 Has Veronica Sawyer survived the Heathers (and JD)? Is the Heathers TV show cancelled or renewed for a second season on Paramount Network? The television vulture is watching all the latest cancellation and renewal news, so this page is the place to track the status of Heathers season two. Bookmark it, or subscribe for the latest updates. Remember, the television vulture is watching your shows. Are you?

The first season of Heathers averaged a 0.04 rating in the 18-49 demographic with 98,000 viewers. Learn how Heathers stacks up against other Paramount Network TV shows.

Will Paramount Network cancel or renew Heathers for season two? I think it is a goner. Because its content is focused on a school slaughter, given the epidemic of gun massacres at US schools, the network twice delayed its premiere and even tried to unload it to another channel. When it couldn’t find a buyer, Paramount decide to air it, but only after editing out some scenes and reducing the episode count to nine. They then pulled two episodes following another mass shooting. I suspect they wanted to make back what money they could and that they’ll move on without a second season of what was originally intended to be an anthology series. I’ll update this page with any new information. Subscribe for free Heathers cancellation or renewal alerts.

What do you think? Should Paramount Network cancel or renew the Heathers TV series for a second season? Would you tune in for season two of Heathers?

I absolutely loved this show, it’s very unique and bold, and it adapted the original film’s theme perfectly to the modern world. It’s good that the first season was a finished story, so we weren’t left hanging, but I’m still hoping it will get a second season despite the controversy, this topic has more potential.

The whole point of the show is to demonstrate the absurdity of oversensitising and overdramatising tragic events. The show shouldn’t be cancelled because it may receive a couple poor ratings due to insensitivity.

Please bring us a second season !!!

Please do a second season of Heathers,it was great!