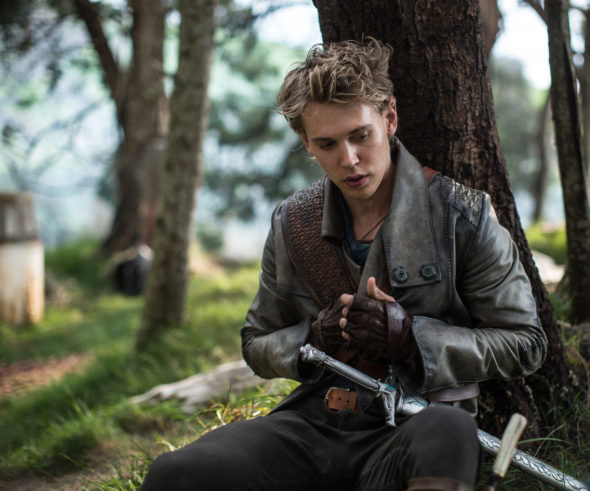 Is the Ellcrys Tree dead? Has The Shannara Chronicles TV show been cancelled or renewed for a third season on Spike TV? The television vulture is watching all the latest TV cancellation and renewal news, so this page is the place to track the status of The Shannara Chronicles, season three. Bookmark it, or subscribe for the latest updates. Remember, the television vulture is watching your shows. Are you?

Airing on the Spike cable channel, The Shannara Chronicles stars Austin Butler, Ivana Baquero, Manu Bennett, Aaron Jakubenko, Marcus Vanco, Vanessa Morgan, Malese Jow, Gentry White, Caroline Chikezie, and Desmond Chiam. When season two kicks off, chaos has overtaken the Four Lands. With the population afraid of the return of magic, a body called The Crimson does not hesitate to intimidate anyone as it hunts down magic users. Meanwhile, in the wake of his losses, Wil (Butler) forsakes his destiny to become a healer. However, after the mysterious Mareth (Jow) saves him, he returns to the struggle.

Based on the ratings, things already didn’t look good and then they started airing two episodes a night which smelled like a burnoff. The Viacom execs have been shuffling programs on their channels (including BET, CMT, TV Land, VH1, and MTV) so they may be okay with this big dip in the ratings as they try to establish the new Paramount Network. I’ll keep a hungry eye out and will update this page with breaking developments (and, hopefully, my supper plans). Subscribe for free updates on any cancellation or renewal news about The Shannara Chronicles.

1/17 update: Paramount Network has cancelled The Shannara Chronicles, but the producer will shop season three to other outlets. Details here.

What do you think? Do you hope the The Shannara Chronicles TV show will be renewed for a third season? How do you feel about Spike/Paramount Network cancelling this TV series?

I just found the Shannara Chronicles on Netflix. I did not have cable for years – couldn’t afford it – but I have Netflix now and it’s OVER already??? I watched 5 episodes and I see I have to watch all the rest before Saturday??? Well, this stinks! Who do I write? Is there a petition?

I just started watching Shannara Chronicles. And just ended the second season. I asked how many books there was and when the last season was put out on Netflix. I am completely down heard they canceled it. How dumb!! It needs to go on!! My mom read the book when she was a teenager. I want to see what happens in the coming seasons!! Bring it back!! This is something that needs or should be out there on Netflix or whatever they can continue it. Elves, gnomes, and so on. It is such an incredible show. Bring Shannara chronicles back!!!

Loved the show! So sad it was cancelled! guess i will have to read the books again.

Really enjoyed this season. Really hoping it will come back

PLEASE bring the show back for a third and subsequent seasons. I recently discovered these on a streaming app I use and am almost done with the second season. I’m hooked! Even if I didn’t love the show, it’d be hard to stop watching with the likes of Eritria steaming up the screen. WOW! DEFINATELY THE MOST STRIKING WOMAN IVE EVER SEEN! I read the Shannara books when I was young so im super stoked to watch it play out on screen. KEEP IT GOING!

Very disappointed that It was left on a cliffhanger and no season 3 to watch.

I came upon this series and wasn’t sure about watching it, but into the first episode I was hooked and then I was ve

The Shannara Chronicles was awesome! It just needs to be advertised better. Such a good show with great characters and stories. Please bring us Season 3!