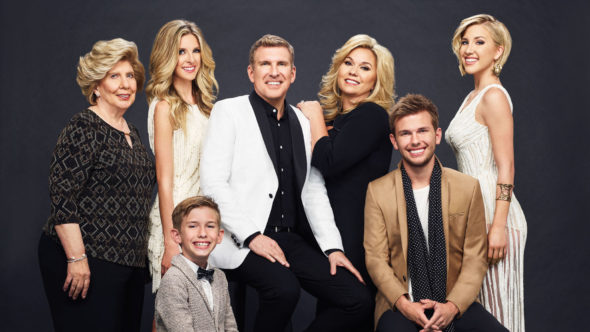 The Chrisley family is branching out. USA Network just announced they’ve ordered a new TV show, Growing Up Chrisley. A spin-off of Chrisley Knows Best, the reality series “will center on brother-and-sister duo Chase and Savannah Chrisley as they road-trip from Nashville to Los Angeles and attempt to break out on their own in the big city.” USA has ordered 16 episodes of Growing Up Chrisley. A premiere date has not yet been set as yet.

However, season six of Chrisley Knows Best resumes on November 28th at 9 p.m. ET/PT. USA has also renewed the series for a seventh season of 26 episodes.

NEW YORK, NY – October 30, 2018 – Today, USA Network announced the pickup of an additional season of its flagship reality docuseries CHRISLEY KNOWS BEST, and greenlit a 16-episode spin-off, GROWING UP CHRISLEY. Both set to air in 2019, the spin-off will center on Chase and Savannah Chrisley as they road trip from Nashville to Los Angeles and attempt to break out on their own in the big city. Season 7 of CHRISLEY KNOWS BEST will continue to follow Todd Chrisley and his family throughout its 26-episode order. It was also announced today that the back half of CHRISLEY KNOWS BEST Season 6 will premiere November 28 at 9/8c, with two back-to-back episodes.

“Todd Chrisley and his entire family have opened their home and hearts to America, and we are so happy to be able to continue to grow, love and laugh with them,” said Heather Olander, Senior Vice President, Alternative Development and Production, USA Network. “In GROWING UP CHRISLEY, Chase and Savannah are trying to make it on their own in a new city – but no matter what, they will always make their way back home. That’s why fans will be sure to see both of them in the new season of the flagship series as well.”

About USA Network:
USA Network, the leader in cable entertainment, offers a powerful stable of dramatic, comedic and unscripted originals in more than 102 million U.S. homes. The network also features spectacular live television, a dynamic portfolio of acquired series and the best in blockbuster theatrical films and entertainment events. A trailblazer in digital innovation and storytelling, USA is defining, driving and setting the industry standard for Social TV. USA is a program service of NBCUniversal Cable Entertainment, a division of NBCUniversal. USA’s award-winning website is located at http://www.usanetwork.com. Watch USA Network anywhere: On Demand, online or across mobile and connected TVs.

What do you think? Do you watch Chrisley Knows Best? Will you check out Growing Up Chrisley?

Todd Chrisley’s tough times are long behind him.
If Chrisley had done every nut has accused him of,
his wardrobe would be an orange jump suit. Lol!
I’ve enjoyed every season of this personable and loving, if delightfully flawed, family.
From Nanny Far to Chloe, these are good folks that have become TV neighbors to many.

Chrisley is a scammer and grifter. Look up his history. It’s public info.

Great show I love it