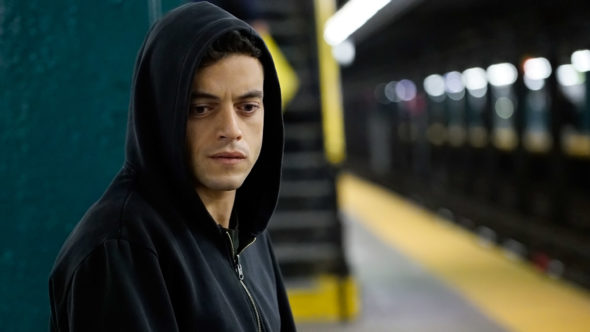 The next few months include the season five return of Chrisley Knows Best (September 12th), the season three premiere of Mr. Robot (October 11th), and the series debut of Damnation (November 7th).

NEW YORK, NY – September 11, 2017 – USA Network’s fall schedule was announced today, including the premiere date of the new original series DAMNATION on Tuesday, November 7 at 10/9c. The co-production from Universal Cable Productions and Netflix follows a bloody battle set in the 1930s as the fight between rich and poor escalates, centering on a preacher and the new strikebreaker in town.

USA’s fall schedule is below:

An epic saga about the secret history of the 1930s American heartland, DAMNATION centers on the mythic conflict and bloody struggle between big money and the downtrodden, God and greed, charlatans and prophets. The pilot introduces Seth Davenport (Killian Scott, “71”), a man masquerading as a small town Iowa preacher in the hopes of starting a full-blown insurrection against the status quo. Focused on his mission, he is unaware that an industrialist tycoon has hired a professional strikebreaker named Creeley Turner (Logan Marshall-Green, “Quarry”) to stop the uprising by any means necessary. But unbeknownst to those around them, these two men already share a secret bloody past. The series also stars Sarah Jones, Chasten Harmon, Melinda Page Hamilton, Christopher Heyerdahl and Joe Adler. From executive producers Tony Tost (“Longmire”), Adam Kane (“American Gods”), James Mangold (“Logan”) Guymon Casady (“Game of Thrones”) and Daniel Rappaport (“Office Space”) on behalf of Entertainment 360, the pilot was written and created by Tost and directed by and executive produced by David MacKenzie (Oscar(R) nominated “Hell or High Water”). Universal Cable Productions co-produces the series with Netflix, who will have first-run rights to the series outside of the U.S.

Serving as the perfect nightcap for Chrisley fans, the new half-hour after-show ACCORDING TO CHRISLEY will feature Todd tackling the truth about marriage, parenting, sex and relationships. With his tough love, sharp tongue and always humorous approach, Todd will interact with an audience, serving up quick-witted advice on a multitude of topics. Additionally, every episode will feature a member of the Chrisley family, as well as a celebrity guest. Confirmed guests include Ali Landry, Chris Jericho, Nicole Sullivan, Erika Girardi, Metta World Peace, Jason George, Christina Milian, Heather and Terry Dubrow and Carmen Electra. ACCORDING TO CHRISLEY is produced by Maverick TV and All3Media America, with Adam Greener, Simon Knight, Greg Lipstone, Corin Nelson and Todd Chrisley serving as executive producers.

For the first time in 11 years since being drafted into the NFL, Antonio Cromartie is a full-time dad. Terricka, his wife, loves having Antonio home to help raise their five, soon to be six, kids, but Antonio’s OCD, intense competitiveness and his raising their kids the same way he would coach a football team may prove to be too much for the whole house! There’s not exactly a playbook for parenting, but as a team, Antonio and Terricka are making their own rules. A Wilshire Studios production, THE CROMARTIES is executive produced by Justin Tucker and Art Lyons.”

What do you think? Do you watch USA Network? Which fall premiere are you looking forward to?