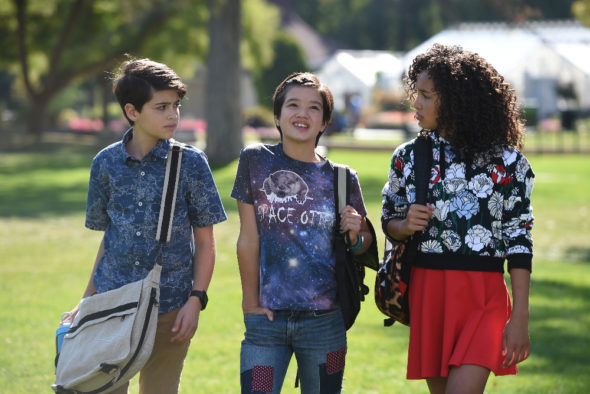 Andi Mack is back! This week. Disney Channel announced season two of the TV show will premiere in October.

Andi Mack,” the series that has captivated kids and families, makes its season premiere with a one-hour episode FRIDAY, OCTOBER 27 (8:00-9:00 p.m. EDT), on Disney Channel and the Disney Channel app (9:00 p.m. EDT). Created and executive produced by writer Terri Minsky (“Lizzie McGuire”) and filmed in Salt Lake City, Utah, the series has been noted for its deft handling of realistic and optimistic stories about a girl, her friends and family.

The cast is featured in the music video for the popular “Andi Mack” theme song “Tomorrow Starts Today,” premiering FRIDAY, OCTOBER 20, on Disney Channel and DisneyMusicVEVO. The song is performed by Hollywood Records artist Sabrina Carpenter and will also be released as a single on October 20.

Since launching in March 2017, “Andi Mack” has reached 45 million Total Viewers on linear TV and has been the #1 TV series in its time period among Kids 2-11, Kids 6-11 and Tweens 9-14 demographics. It is also the #1 TV series of 2017 to date among Girl demographics. On digital platforms, “Andi Mack” has generated 33 million Total Views to date, including the most views for a series on Disney Channel VOD (18.3 million) and the Disney Channel App (6.6 million), and 7.3 million views to date for its full premiere pilot episode via YouTube.

The first season introduced Andi on the eve of her 13th birthday just as she learns that her older sister Bex is actually her mother. This revelation puts Andi on an unfamiliar path of self-discovery which she navigates with the help of her two best friends, Cyrus and Buffy, and her loving family. Season one culminated with Andi convinced that her parents Bex and Bowie are destined to be together. Meanwhile, Andi’s middle school crush, Jonah Beck, has just broken up with his girlfriend, Amber.

In the season two premiere, Andi encourages Bowie to plan a future with Bex, Cyrus introduces his girlfriend, Iris, to Andi and Buffy; and Jonah invites Andi to the Space Otters’ party.

All “Andi Mack” season one episodes become available on the Disney Channel App.

The cast is featured in the music video of the “Andi Mack” theme song “Tomorrow Starts Today” (sung by Sabrina Carpenter), premiering on Disney Channel and VEVO.

All season one episodes to be presented, one per night every Monday through Thursday, on Disney Channel (8:00 p.m. EDT).

The series is from Horizon Productions. It carries a TV-G parental guideline.”

What do you think? Have you seen Andi Mack? Are you looking forward to the new season?