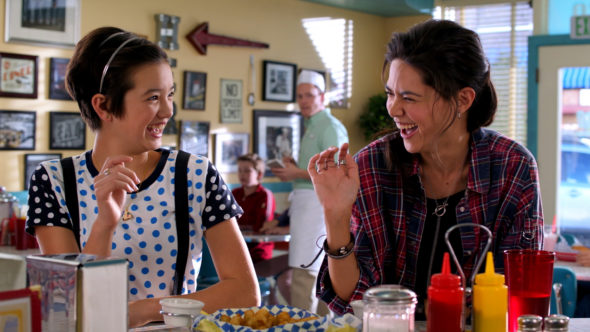 TV show description:
A live-action comedy from creator Terri Minsky, the Andi Mack TV show is a coming-of-age story centered on Andi Mack (Lee). The night before her 13th birthday, Andi finds out that Bex (Bowden) is not her big sister, but is actually her mother.

As if this stage of life weren’t already replete with upheaval, Andi feels adrift and sets out to figure out who she really is. Thankfully, her good friends Cyrus (Rush) and Buffy (Wylie) have her back and are also trying to figure out how and where they fit into this crazy world.

Accustomed to acting as her parents, Andi’s grandparents Celia (Tom) and Ham (Westmoreland) still feel overprotective of her, even though Bex is home and ready to be a mother. Bex, for her part, is pretty good about nudging Andi to try new things. When Andi meets her father Bowie (Garrett), she has to figure out where he fits in her real life, rather than her fairytale image of family.

To complicate everything, Andy has quite a crush on Jonah Beck (Angel). Whether he likes her or not is sort of hard to figure out, so Andi spends a lot of time in the “Andi Shack,” — her own little hideaway in her backyard.

What do you think? Do you like the Andi Mack TV series? Should this TV show have been renewed for a fourth season on Disney Channel?

Please don’t end Andi Mack! It was an amazing show and I loved watching the mysterious life of Andi and her family and friends. My mom and I would always watch this show and it would be a shame if it just ended! It was just getting good! A fourth season would be awesome and I would love it if they would keep this show going. All the viewers out there are very disappointed that this show is going to end so please, FOURTH SEASON. It was one of my favorite shows and I don’t want it to end!!!!! Please… Read more »

I usually come here to rant about why Andi-Mack is the worst show on Disney Channel, but I’m not this time. This time, I’m here to apologize for my previous actions. I haven’t considered your feelings and opinions as I said I would, and I sincerely apologize for it. I have actually taken a decent liking toward the show in recent times. I am also deeply sorry for any harm I have caused to anyone’s feelings. I hope you will be able to forgive me. If you don’t, that’s perfectly fine. I truly hope you all will accept my apology… Read more »

Why is it cancelled though?