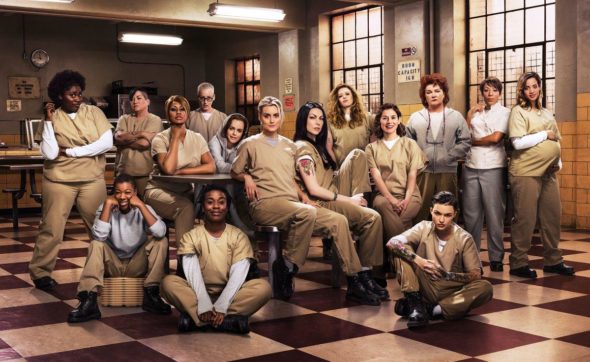 TV show description:
A dramedy, this series follows the life of Piper Chapman (Taylor Schilling), a New York City resident whose wild past comes back to haunt her. This results in her arrest and detention in a federal penitentiary

Piper’s sentenced to 15 months at the women’s federal prison in Litchfield, New York after being caught transporting a suitcase full of drug money for Alex Vause (Laura Prepon). Alex is an international drug smuggler and a past girlfriend. Incarcerated in the same facility as Piper, Alex grew up poor with girls in school bullying her and eventually wound up in the drug business.

Piper starts a line of artisanal soaps prior to leaving for prison. Once inside, she tries to understand her place in the prison hierarchy, as well as handle the stresses of her new life and of trying to maintain a relationship with her fiance, Larry Bloom (Jason Biggs). He’s a struggling journalist who believes their relationship can withstand Piper’s incarceration.

Miss Claudette (Michelle Hurst) is Piper’s roommate. She’s initially very strict but softens over time. Before prison, Miss Claudette ran an illegal immigration and child labor cleaning service. She was inducted into the service when she came to the United States as a child.

Galina ‘Red’ Reznikov (Kate Mulgrew) owned a restaurant with her husband and worked with the Russian mob. Now in prison, Red is the go-to woman and runs the place behind the scenes. Red takes some women under her wing and gives them a chance to work with her.

Tiffany “Pennsatucky” Doggett (Taryn Manning) works with Alex in the laundry room and preaches about God and healing others. She shot a nurse at an abortion clinic after an offhand remark and found religion when a Christian law firm got her a shorter sentence in prison.

Sam Healy (Michael J. Harney) helps to run the prison and manages Piper’s case, among others. He is in a relationship with an immigrant who has two years left to wait until she gets her green card.

Series Finale:
Episode #91 — Here’s Where We Get Off
Tearful farewells, emotional tributes, new beginnings. Say goodbye to the women of Litchfield in the series finale.
First aired: July 26, 2019.

What do you think? Do you like the Orange Is the New Black TV series? Do you think it should have ended with season seven or been renewed for an eighth season?

This totally stellar program has had its run. I really enjoyed it.

Renewed I hope another network revives the show

PLEASE RENEW I love this show

Please don’t cancel this show, it’s one of the only things that my son and I watch together.!

why take so long with new seasons ?

I have just recently started watching the show , and I am hooked! I am upset with myself for not watching when debuted. I can ABSOLUTELY RELATE, because I did a 7 year federal prison sentence from 2003 to 2010. I have lived thru all these ordeals the good and the bad , from contraband eyeliner to drugs, to sex with officers, yes I am so in tune with this show! Thanks from Georgia!

Love the show, I can’t wait for season 3 to start!

One of the best written shows on TV. Do not cancel, please!

Love it!!! make another season!!! wait! what network dose this come on been watching on Netflex.. so far so GREAT!!! Very funny & Realistic!!!!! 😉

Waiting for season 3 on Netflix. Also like House of Cards and The Following!