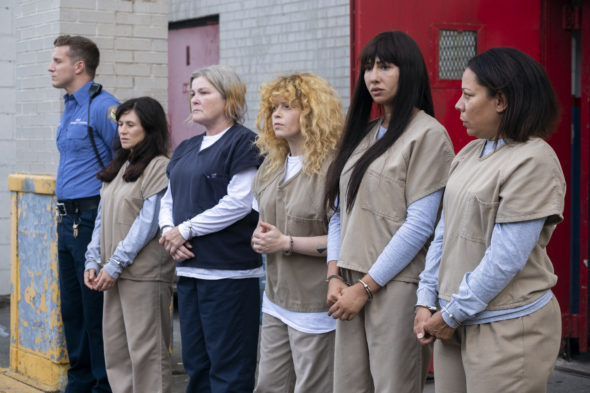 Are the ladies of Litchfield finally short-timers? Has the Orange Is the New Black TV show been cancelled or renewed for an eighth season on Netflix? The television vulture is watching all the latest TV cancellation and renewal news, so this page is the place to track the status of Orange Is the New Black season eight. Bookmark it, or subscribe for the latest updates. Remember, the television vulture is watching your shows. Are you?

A Netflix comedy-drama, Orange Is the New Black stars Taylor Schilling, Laura Prepon, Michael Harney, Kate Mulgrew, Uzo Aduba, Danielle Brooks, Natasha Lyonne, Taryn Manning, Selenis Leyva, Adrienne C. Moore, Nick Sandow, Yael Stone, Jackie Cruz,  Elizabeth Rodriguez, Jessica Pimental, Laura Gómez, Matt Peters, Dale Soules, Alysia Reiner, and Dascha Polanco. The series follows Piper Chapman (Schilling), a New Yorker, whose wild past comes back to haunt her. She is sentenced to 15 months at the women’s federal prison in Litchfield, New York after being caught transporting a suitcase full of drug money for Alex Vause (Prepon), who is also doing time there. In the seventh season, Piper tries to adjust to life on the outside, while life in Litchfield goes on without her.

This time out, we don’t have to wonder whether Netflix will cancel or renew Orange Is the New Black for season eight, because the streaming series is coming to an end. Since it was the first unqualified hit show on Netflix, I’ll still keep an eye on things and update this page with any developments regarding spinoffs and the like, so subscribe for free alerts on any Orange Is the New Black TV series news.

No season eight are you kidding me, why? I look forward to the craziness plus the way you depict what is truly happening out there with some prisons and deportation. Please make a come back and do more seasons.