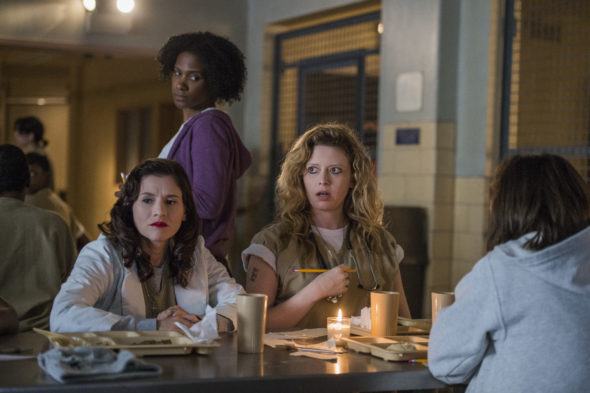 Netflix is ending Orange Is the New Black but is that it for the series? According to The Hollywood Reporter, producers Lionsgate TV Group are considering a spin-off to the hit TV show.

We’re really proud of the long run that Orange Is the New Black had. It remains one of Netflix’s most-watched shows. We’re ending on a high note. Keep in mind we own that series and will be distributing it for years to come. We’re already in discussions and, when the timing is right, we’ll talk further with Jenji about a potential sequel.”

The final season of Orange Is the New Black is set to debut on Netflix in 2019.

What do you think? Do you watch Orange Is the New Black? Would you watch a sequel series?

That was a great series! It can’t be cancelled. Loved the story and the characters and it had shown the nasty privation of prisons. VERY GOOD!

I love OITNB and would definitely watch a sequel!!!!

I love this show!! I would love to see a sequel!!!

I love ORANGE and would certainly watch a sequel. They cant leave us up in the air.

I heard there was going to be a film Orange is The New Black, yet another series would be fine too. I like the show and the actors.

The show wasn’t canceled. It was announced a couple of years ago that it was ending with season 7. It’s ENDING. Not canceled.