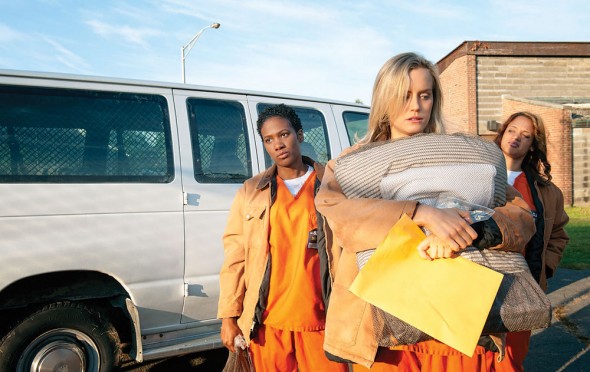 Netflix has a lot of faith in Orange Is the New Black, their newest original TV series. They’ve renewed the show for a second season, weeks before they’ve unveiled the first.

(Beverly Hills, CA – June 27, 2013) – The Netflix Original Series, “Orange is the New Black,” the comedic drama set in a women’s prison from creator and executive producer Jenji Kohan (“Weeds”) will return with a second season on Netflix in 2014.

Produced by Lionsgate Television, the hour-long series starring Taylor Schilling, and based on the popular memoir of the same name by Piper Kerman, is set to debut its first 13-episode season on Thursday, July 11 at 12:01 AM PDT in all territories where Netflix is available – U.S., Canada, the U.K., Ireland, Latin America, Brazil and the Nordics.

“Jenji and her team have produced a phenomenal series and we’re eager to get a second season to our viewers,” said Cindy Holland, Vice President of Original Content at Netflix.”

“I am thrilled that Netflix has extended my sentence,” said series creator and executive producer Jenji Kohan.

“We’re enormously proud of the brilliant work of Jenji, the cast and the entire production team,” said Kevin Beggs, president, Lionsgate Television Group, “and we’re delighted about this early second season renewal. Netflix has been a great partner on this series and we look forward to our continuing collaboration.”

“Orange is the New Black” follows engaged Brooklynite Piper Chapman (Taylor Schilling), whose decade-old relationship with drug-runner Alex (Laura Prepon) results in her arrest and 15-month long detention in a federal penitentiary. To pay her debt to society, Piper must trade her comfortable New York life with fiancé Larry (Jason Biggs) for an orange prison jumpsuit and a baffling prison culture where she is forced to question everything she believes and form unexpected new alliances with a group of eccentric and outspoken inmates. The series’ diverse ensemble also includes Kate Mulgrew, Natasha Lyonne, Pablo Schreiber, Danielle Brooks, Laverne Cox and Taryn Manning.

The second season of “Orange is the New Black” is set to begin production later this summer.

“Orange is the New Black” is executive produced by Kohan. The series is produced by Lionsgate Television for Netflix.

Netflix is the world’s leading Internet television network with more than 36 million members in 40 countries enjoying more than one billion hours of TV shows and movies per month, including original series. For one low monthly price, Netflix members can watch as much as they want, anytime, anywhere, on nearly any Internet-connected screen. Members can play, pause and resume watching, all without commercials or commitments. Learn more about how Netflix (NASDAQ: NFLX) is pioneering Internet television at www.netflix.com or follow Netflix on Facebook and Twitter. Netflix’s original series include the political drama “House of Cards,” which stars Kevin Spacey and Robin Wright; “Hemlock Grove,” Eli Roth’s murder mystery series based on Brian McGreevy’s gripping novel of the same name; the fourth season of the critically-acclaimed comedy “Arrested Development;” Ricky Gervais’s bittersweet 30-minute comedy drama, “Derek,” about a group of outsiders living on society’s margins; the second season of “Lilyhammer,” which stars Steven Van Zandt; and “Sense8” the upcoming global tale of minds linked and souls hunted from the Wachowskis and J. Michael Straczynski.

What do you think? Does this show sound interesting? Do you plan on watching?

I love “Orange is the new Black” Once I started watching I could not STOP!!!! I can’t wait for the next season to begin!!! I will be glued to it AGAIN!!!! Sorry grandkids….. Grandma is BUSY!!!! LOL! So hurry up and let’s get this ball rolling!!

AWESOME show…watching it on DVD looking to get season 2….with that cliff hanger. Man
I can’t wait to find out what happens to that little false bible preaching *****. But I don’t want Piper to get in trouble. That counselor dude is such an ASS….
ahhhhhhh

I love this series and hope there are more seasons! it is very well written and the character progression is addictive

this is the best show I have ever watched and I can’t wait for Season 2 to begin .. please hurry and I hope n pray that Laura Prepon AKA Alex doesn’t quite the show … she is one of the best actresses in it !!!! I am still shocked by the cliff hanger !!!! I never expected that at all !!! excellent writers

Absolutely obsessed with this show!!! Please don’t make me wait till next summer for new episodes!!!! This show is brilliant!! The cast is perfect! The storyline genius! I really would love to praise the producer and cast and crew of a job well done personally! Its done so well that you really think this is all true! Every women can relate to one of the many characters! This show makes me happy,mad,sad and laugh everything all in one episode a must watch “BRAVO” take a bow and please keep creating!!!!

EXTRAORDINARY ! KEEP UM COMING…….ALL THE CHARACHTERS WERE VERY REAL AND RELATEABLE……THX. CANT WAIT FOR SEASON TWO. NEVER BEEN TO PRIZON BUT I HAVE SOME FUNNY ASS STORIES I WOULD LOVE TO RELAY TO SOMEONE……………

I absolutely love this show! All the cast members do a fantastic job. I can’t wait to watch season two. Keep the great shows coming.

Love show- will recommend to friends

I plan to watch it every chance I get. Should be interesting how they manage things.

Outstanding!!!
Great writing and absolutely great character development and portrayal. You have created the whole package. Hats off! Can hardly wait for season 2.
Hurry please.