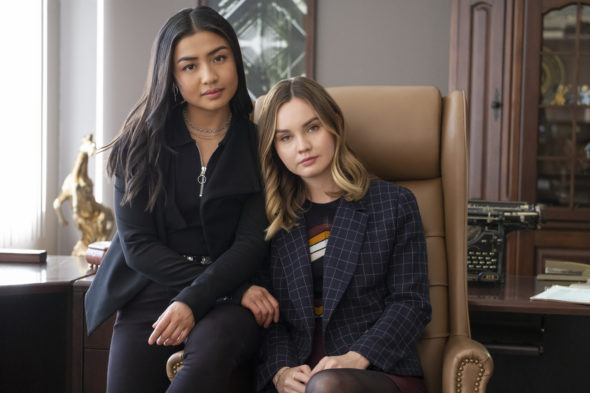 Will McKenna Brady ever be free of the curse? Has the Light as a Feather TV show been cancelled or renewed for a third season on Hulu? The television vulture is watching all the latest TV cancellation and renewal news, so this page is the place to track the status of Light as a Feather season three. Bookmark it, or subscribe for the latest updates. Remember, the television vulture is watching your shows. Are you?

A Hulu supernatural thriller, Light as a Feather stars Liana Liberato, Haley Ramm, Brianne Tju, Jordan Rodrigues, Dylan Sprayberry, Brent Rivera, Katelyn Nacon, Kira Kosarin, Froy Gutierrez, Alisa Allapach, Alex Wassabi, Robyn Lively, Alan Stokes, Alex Stokes, and Adriyan Rae. From creator R. Lee Fleming Jr. and based on the Zoe Aarsen book, the drama centers on centers on McKenna Brady (Liberato), a shy, popular high schooler, whose twin sister, Jennie (Liberato) is deceased. When a new student, Violet (Ramm), introduces McKenna and her clique to a new version of the “Light as a Feather, Stiff as a Board” game, and the girls start dying off, the survivors must get to the bottom of the threat against them. In season two, now that McKenna bears the curse, she refuses to play the game and risk others to save herself. Violet may be her only hope.

Unless they decide to publicize viewership statistics, it is difficult to predict whether Hulu will cancel or renew Light as a Feather for season three. It took them about six months to announce the renewal last time, so we may be in for a long wait. The streaming service has split the second installment into two parts, so fans get eight episodes beginning on July 26th, and the second half starting October 4th. Flying blind, if the first half performs well, I think there’s a good chance that if it is renewed for a third season, that news could come around the time part two premieres. In the meantime, I’ll keep an eye on press releases and the trades and update this page with breaking developments. Subscribe for free Light as a Feather cancellation or renewal news.

What do you think? Should the Light as a Feather TV series be renewed for a third season? How would you feel, if Hulu cancelled this TV show, instead?

Love this show.This show has so much more to it.

It should be renewed as it is a very nice web series.