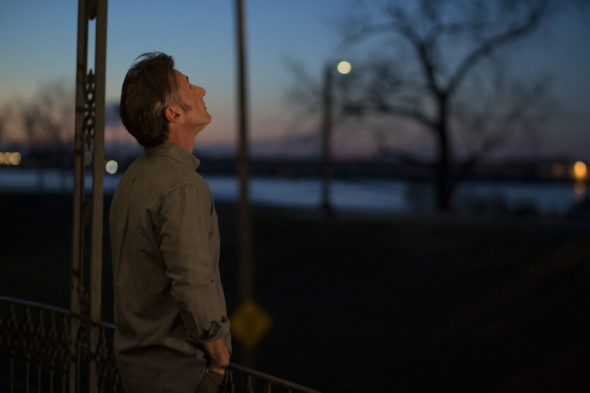 Will their be seconds? Has The First TV show been cancelled or renewed for a second season on Hulu? The television vulture is watching all the latest TV cancellation and renewal news, so this page is the place to track the status of The First season two. Bookmark it, or subscribe for the latest updates. Remember, the television vulture is watching your shows. Are you?

Unless they decide to publicize viewership statistics, it is difficult to predict whether Hulu will cancel or renew The First for season two. While there are positive reviews, many note that this is not the type of fare sci-fi fans may expect. Will that help or hurt its chances? Stay tuned. For now, I’ll keep an eye on the trades and update this page with breaking developments. Subscribe for free alerts on The First cancellation and renewal news.

1/19/19 update: The First has been cancelled after one season on Hulu.

What do you think? Were you hoping that The First TV series would be renewed for a second season? Are you sorry that Hulu cancelled this TV show, instead?

Very disappointing and waste of time.

Very drawn out sifi? This tv series is not a sifi adventure. After watching the first 2 episodes i started to wonder if the series would make it to space. I had to forward to the last 20 min. of the last episode when they launched to orbit. That was it and that show was a drama in total and no sifi adventure. This series should have been call the people and their families that could go to Mars. Very much a waste of time if looking for a sifi space adventure. Very disappointing and feel fooled by the label.… Read more »

Was hoping for season 2. I really liked the show and was really stupid to cancel it.

Bring back the first, one of the best dramas I have ever seen, so well done! Please bring back a new season, we all need it in these days of uncertainty!

While this show was not what we had originally expected, the excellent acting, character studies, and amazing cinematography drew us in. The initial investment is a little high, but worth the payout. Very disappointed that it was not picked up for additional season(s). I, and surprisingly my wife, really enjoyed the series and ask you to reconsider renewing.

Excellent show. As a Hulu original it did not sufficient exposure to contemplate cancelling after one season. Needs to be renewed for 2nd season and beyond!!

I don’t understand???? The First, is an awesome. very educational, even if it is a tv series. Acting was awesome, actors were perfect, Great storyline. I mean it has it all. WHY??? You keep useless, mindless series on and get rid of some of the greats. Please reconsider keeping “The First” I understand it has a good audience. PLEASE!!!

Excellent series. The character development, acting, special effects, drama, story, and inspirational message were all top drawer. After watching the first season, I was all set for the trip to Mars and was very disappointed to discover that there would be no second season. Producers, please reconsider. This is one that should go on, especially considering the fact that we will be going to Mars in the not-to-distant future.

I’m so upset that The First has been cancelled. My husband and I happened upon it on Hulu and have thoroughly enjoyed it. Please consider bringing it back.

Renew “The First”, it’s realistic it gives you a sense of what being an astronaut takes the characteristics, the attitude, the decisions you have to make with you family on earth and the risks that you will be taking. The first is not only educational and informing of what becoming an astronaut takes, but the all the people that it takes to make it work. How one mistake could be tragic and the consequences of those mistakes. There were so many things left unsaid will Denise be alright, who was the man on the phones, what happens if and or… Read more »

I am really upset. I invested a lot of time watching the first season and I was really into it. I knew that when they rushed the takeoff that the series was cancelled. I thought that the series had a lot of potential once it got into space. The takeoff, docking and the views were incredible. Loved how they floated around in the spacecraft. Hulu may have lost me as a subscriber because I now feel betrayed. They sucked me in just to let me down. To me the adventure had just begun.

“The First” was awesome!! Please renew the show for another season. Give it at least two seasons before making a firm decision. The visual affects are spectacular. We need more space shows.