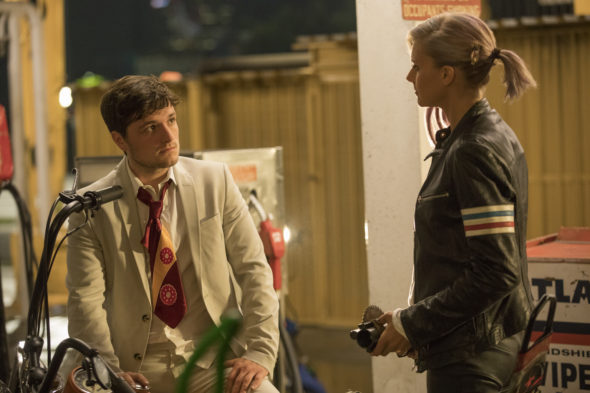 Will Josh, Tiger, and Wolf get a chance to save the world? Has the Future Man TV show been cancelled or renewed for a second season on Hulu? The television vulture is watching all the latest TV cancellation and renewal news, so this page is the place to track the status of Future Man, season two. Bookmark it, or subscribe for the latest updates. Remember, the television vulture is watching your shows. Are you?

Streaming on the Hulu paid subscription platform, Future Man stars Josh Hutcherson, Eliza Coupe, Derek Wilson, Glenne Headly, and Ed Begley Jr. The time travel comedy centers on gamer Josh Futterman (Hutcherson). Josh hasn’t amounted to much in the real world, but he’s the top-ranked Cybergeddon player. When he finally beats this supposedly “unbeatable” game, he is visited by Tiger (Coupe) and Wolf (Wilson) — characters who explain the game is actually a training manual. Now that he has mastered Cybergeddon, it is up to Josh to travel back in time and save the world.

Unless they decide to publicize its viewership numbers, it is difficult to predict whether Hulu will cancel or renew Future Man for a second season. Flying blind, I think it will get a second season, but that’s just a guess. I will keep an eye on things and update this page with breaking developments. Subscribe for free updates on any Future Man cancellation or renewal news.

What do you think? Do you hope the Future Man TV show will be renewed for a second season? How would you feel if Hulu cancelled this TV series, instead?

Yeah, they kinda left us hanging. Kronish said someone got ahold of his research, even though he tried to keep it a secret. Maybe a Biotic stole it and Kronish killing himself and the building getting blown up were for naught. And we don’t know who teleported into Josh’s cell.

This show if freaking hilarious!!! Please let there be a season 2-3-4….

I LOVE THIS SHOW!!! Super funny!! You guys should do season 2.. a lot of people I Know love this show!!

Awesome show! Freaking hilarious and well written (Ignoring certain time-travel errors :P). I love how it can be binged but also that each episode is mostly its own self-contained story. Almost positive it’ll get a second season with how many people I’ve heard loved it and watched it all the way through.

I love this show and hope for a second season maybe even with episodes weekly.

I hope there is a season 2. I still think the other excellent series Time Traveling Bong should also be continued.