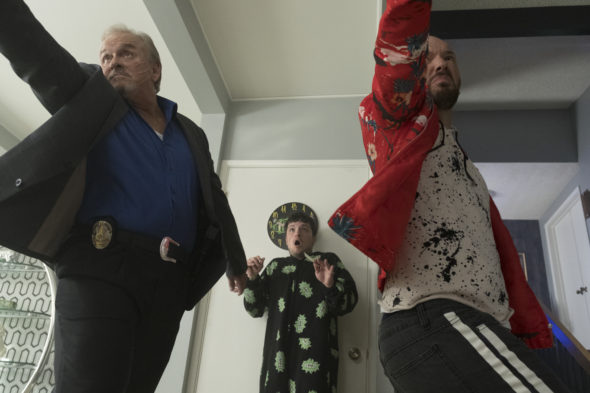 Have Josh, Tiger, and Wolf’s time travels come to an end? Is the Future Man TV show been cancelled or renewed for a third season on Hulu? The television vulture is watching all the latest TV cancellation and renewal news, so this page is the place to track the status of Future Man, season three. Bookmark it, or subscribe for the latest updates. Remember, the television vulture is watching your shows. Are you?

Streaming on the Hulu paid subscription platform, Future Man stars Josh Hutcherson, Eliza Coupe, Derek Wilson, Glenne Headly, and Ed Begley Jr. The time travel comedy centers on gamer Josh Futterman (Hutcherson). Josh hasn’t amounted to much in the real world, but he’s the top-ranked Cybergeddon player. When he finally beats this supposedly “unbeatable” game, he is visited by Tiger (Coupe) and Wolf (Wilson) — characters who explain the game is actually a training manual. Now that he has mastered Cybergeddon, it is up to Josh to travel back in time and save the world.

Unless they decide to publicize its viewership numbers, it is difficult to predict whether Hulu will cancel or renew Future Man for season three. I will keep an eye on things and update this page with breaking developments. Subscribe for free updates on any Future Man cancellation or renewal news.

4/9/19 update: Hulu has renewed Future Man for a third and final season of eight episodes.

What do you think? Are you glad that the Future Man TV show has been renewed for a third season? Are you sorry that there won’t be a fourth season?

I really enjoyed season 1 and season 2 wasn’t bad. The ending was weird – but, definitely could be left open for a season 3… And I’d GLADLY binge watch a season 3, based on S1 and S2!

Having just finished season two, I realllllly want more. Surely there are enough of us who agree on that!