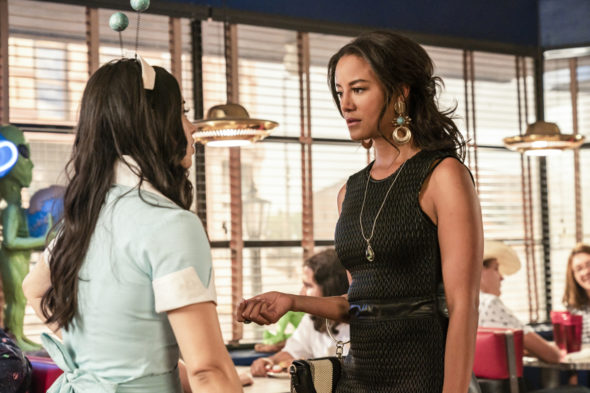 The second season of Roswell New Mexico is coming to the CW next month, and a new trailer shows off what will happen next for Liz and her friends after the shocking events of the season one finale. Fans saw the death of Max Evans, and he is really dead, according to the woman in charge.

However, EW shared comments from Carina Adly MacKenzie, the creator of The CW series, and Max will be seen in the new season. MacKenzie said they “found creative ways to use him.” Fans will see Max in flashbacks, and they will see teenage Max Evans again.

What do you think? Are you excited for season two of Roswell New Mexico? Do you want Max to return to life?

I am going to stop watching if Max is gone.

I agree with some of the others,I started watching because of Nathan Parsons(Max)
I really love the show,and was excited to have it come back,,but really disappointed if Nathan ,( Max) does not return
I’m tired of choosing a show,and then one or two seasons later the writers mess it up,
If he doesnt return,,I’m done watching!!!

I think Jason behr May resume his role as Max. Didnt they say that he was casted? He could replace previous actor or be used as flashback Max. Lets ser

Please bring max back somehow. He also makes the show. Been praying for the show to come back. Loved the original. Keep em coming.

Please bring Max back… This is their love story..the main characters.. It wouldn’t be the same without Max. Hello.. They brought Rosa back and she’d been dead for 10 years.

The show would not be the same if they cut Max out of the story. I can see Liz going into mad scientist mode to bring him back. I hope this go around they dive in more with Liz developing abilities and thats how she brings him back.

Max and Liz got married on the final series. They left with isobel, maria, Michael and Kyle

i will stop watching if he is not on. I really like him!

I am with everyone else. No reason to watch if max is really died. Maybe have him died for a couple of shows but then have him come back some how. He is the show.

I’m not going to watch since Mac is really dead. No reason

I am hoping that Max come back to life in this season. I watch it all the time and like the part he plays.

Max is the only reason I watch Roswell, New Mexico. If he doesn’t come back to life, and it’s all flashbacks, I probably won’t watch anymore.

Max returning would be a must for my continued viewing

Phyllis D
Reply to  Gail B

Why not bring him back .He is a alien ,who knows what they can do