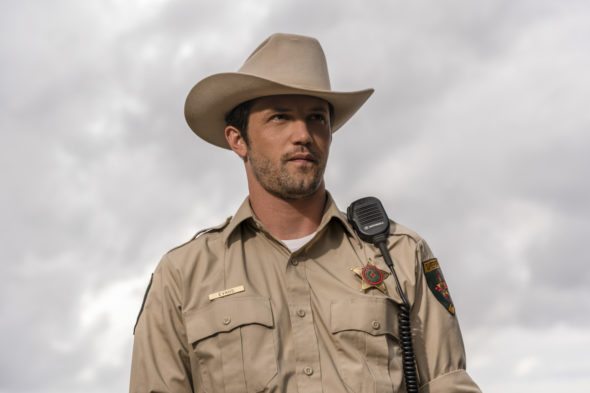 Is there still truth to every rumor? Has the Roswell, New Mexico TV show been cancelled or renewed for a second season on The CW? The television vulture is watching all the latest cancellation and renewal news, so this page is the place to track the status of Roswell, New Mexico, season two. Bookmark it, or subscribe for the latest updates. Remember, the television vulture is watching your shows. Are you?

A science fiction drama on The CW television network, Roswell, New Mexico stars Jeanine Mason, Nathan Dean Parsons, Lily Cowles, Michael Vlamis, Michael Trevino, Tyler Blackburn, Heather Hemmens, Trevor St. John, and Karan Oberoi. Based on the Roswell High book series (which was also the basis for a 1999 TV series), this series centers on Liz Ortecho (Mason), who’s back in town after a decade away. After reconnecting with her old crush, Roswell PD Officer Max Evans (Parsons), she learns he, his sister Isobel (Cowles) and their friend, Michael (Vlamis), are aliens. Now Liz has to keep this secret from everyone she knows, including her old high school boyfriend, Dr. Kyle Valenti (Trevino), and her best friend, Maria De Luca (Hemmens). Meanwhile, the politics of hatred, fear, and division threaten to expose them all and risk everyone’s lives.

4/24/19 update: The CW has renewed Roswell, New Mexico for a second season.

What do you think? Are you glad that the Roswell, New Mexico TV show has been renewed for a second season? How would you feel if The CW had cancelled this TV series, instead?

I am so excited. Was definitely hoping for a second season!

YES! Loved the original Roswell and loved this show within the first 10 minutes. Though the writers could have dared to be different and kept away from the political and social propagandas. Those two items are being done to death, most people are sick of it and are searching for a little bit less real world drama and ideation being shoved in their faces every waking moment. I’m like most folks, I find a show or movie to watch, to leave the world behind for a little while. Fantastic show, but could have been much better, minus those things.