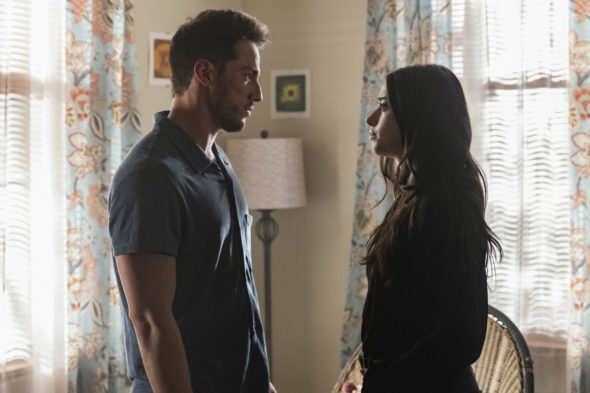 Is the first season of The CW’s Roswell, New Mexico TV show out of this world or rather mundane? As we all know, the Nielsen ratings typically play a big role in determining whether a TV show like Roswell, New Mexico is cancelled or renewed for season two. Unfortunately, most of us do not live in Nielsen households. Because many viewers feel frustration when their viewing habits and opinions aren’t considered, we’d like to offer you the chance to rate all of the season one episodes of Roswell, New Mexico here. *Status update below.

A CW sci-fi drama, Roswell, New Mexico stars Jeanine Mason, Nathan Parsons, Lily Cowles, Michael Vlamis, Michael Trevino, Tyler Blackburn, Heather Hemmens, Trevor St. John, and Karan Oberoi. Based on the Roswell High book series (which was also the basis for a 1999 TV series), this series centers on Liz Ortecho (Mason), who’s back in town after a decade away. After reconnecting with her old crush, Roswell PD Officer Max Evans (Parsons), she learns he, his sister Isobel (Cowles) and their friend, Michael (Vlamis), are aliens. Now Liz has to keep this secret from everyone she knows, including her old high school boyfriend, Dr. Kyle Valenti (Trevino), and her best friend, Maria De Luca (Hemmens). Meanwhile, the politics of hatred, fear, and division threaten to expose them all and risk everyone’s lives.

What do you think? Which season one episodes of the Roswell, New Mexico TV series do you rate as wonderful, terrible, or somewhere between? Should The CW cancel or renew Roswell, New Mexico for a second season? Don’t forget to vote, and share your thoughts, below.

Roswell is a great show and should definitely renew!! Please renew?!!!

We are holding our breath to find out what is in store for us in season 2!! Love all the these actors! We are huge Vampires and Originals fans and get that same connection with the characters on Roswell NM!!!! Can’t wait!!!

I can’t wait for season 2 of Roswell, New Mexico. I need to know everything that will happen.

I binge watch…can’t help myself. Love the characters. Each one adds an unbelievable strength to their character!! Totally enjoyed Season 1. Please do not cancel!!

I agree!!! I love it. I used to live near Roswell and I enjoy NM being the center. I love all the characters and some of the scenes have be on the edge. I’m glad to see it’s going to season 2!!

Hard at first, as I was in love with the first series and characters. I thought this was going to pick up from the last series, I was very wrong.

This one is completely different on so many levels. But I have learned to love it too, for its own show.

I hope it doesn’t cancel. I would really like to see Roswell finally fully develop into a full intact series. I think this story will always have a strong underground fan base. And I am one of them. <3