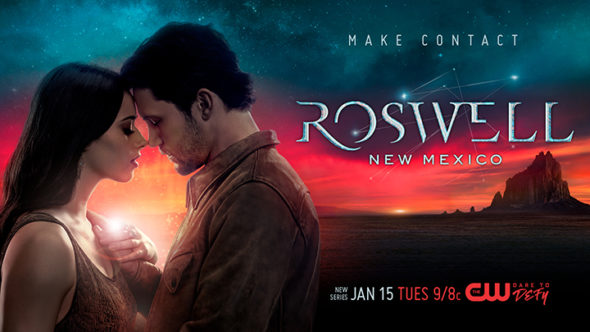 The original Roswell ran on The WB and UPN between 1999 and 2002, and was something of a cult-classic for the former television networks. The source material, the Roswell High book series by Melinda Metz, has captured imaginations for a couple of decades, and now has inspired another series, the Roswell, New Mexico TV show. Is it too out-of-this-world to succeed in something as mundane as the Nielsen ratings? Will Roswell, New Mexico be cancelled or renewed for season two? Stay tuned. *Status update below.

4/24 update: You can see the latest night’s ratings in context.

What do you think? Do you like the Roswell, New Mexico TV series on The CW? Should it be cancelled or renewed for a second season?

Obviously very politically bias. Several jabs at President Trump. Anti-firearm in season finally . Its a fantasy show , but watchers need to know that – no California is not the only state that requires a background check for a firearm.

When the first Roswell was on, I was one of those who sent Tobasco Sauces to protest rumours of cancellation. I started watching Roswell New Mexico to see how it compared to the old show. Even though so much of it was different, I think that the spirit of the show continues. I am glad it was renewed for another season.

I must admit, the Roswell reboot has really not been living up to the standards of the original 1999 Roswell series. The reboot of Roswell is just CRAP!!! They might as well just CAN it if you ask me!!!! The original show had so much more originality, passion, character driven story line etc. and for a long time I was hoping for some kind of revival of the ORIGINAL series….not this New Roswell crap!

I hope it gets renewed. I’ve been a faithful watcher since it’s debut.

Well they should be happy they are on the CW and they tend to keep lower rated shows but honestly this show was a huge insult to the original series and books. They would have been better off doing a new series about aliens in Roswell then rebooting the old one if they were going to change everything about it. I don’t really care if it gets renewed I won’t be watching on to the next