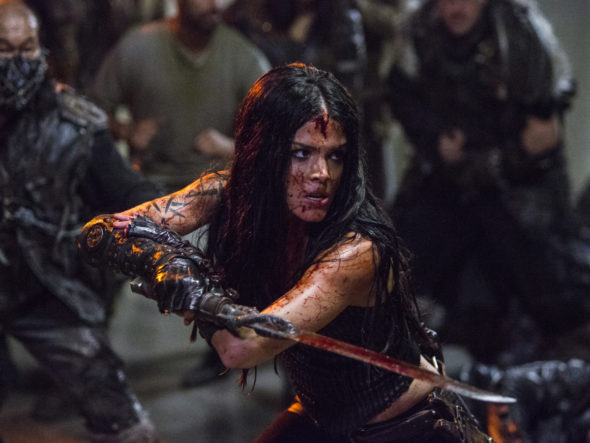 Will the human race survive? Has The 100 TV show been cancelled or renewed for a sixth season on The CW? The television vulture is watching all the latest cancellation and renewal news, so this page is the place to track the status of The 100, season six. Bookmark it, or subscribe for the latest updates. Remember, the television vulture is watching your shows. Are you?

A dystopian sci-fi drama on The CW television network, The 100 stars Eliza Taylor, Paige Turco, Bob Morley, Marie Avgeropoulos, Lindsey Morgan, Christopher Larkin, Henry Ian Cusick, and Tasya Teles. The story centers on a post-apocalyptic group of survivors, who believe their people are all that is left of mankind. When they return to Earth, they realize they aren’t the only ones.

Season five kicks off six years after the season four finale, with our heroes still separated. While Bellamy’s (Morely) team is in space, Clarke (Taylor) is on the ground, and hundreds are trapped in the bunker below. When a prison ship descends upon the last habitable spot on the planet, The 100 must unite to reclaim their home. Expect alliances to shift as war threatens to wipe out the remnants of humanity.

Although it premiered with positive numbers when compared to last year’s debut, it is still too early to use the ratings to predict whether The CW will cancel or renew The 100 for season six. For now, I’ll keep an eye on the ratings and update this page with breaking developments. Subscribe for free alerts on The 100 cancellation and renewal news.

What do you think? Did you think The 100 TV show would be renewed for a sixth season? How would you feel if The CW had cancelled this TV series, instead?

The 100 is a real rocky ride. One moment you think it’s over, next moment you’re following the plot again. Rinse and Repeat.

I just saw commercial (5-27-2020) stating this is the final season for the 100. I didn’t actually see that news in the paragraphs above so… That’s your update.
Sad to see this series go. Great cast, and interesting story. I was hoping they’d move to another planet again this season.
At least we still have The Expanse!??? I hope.