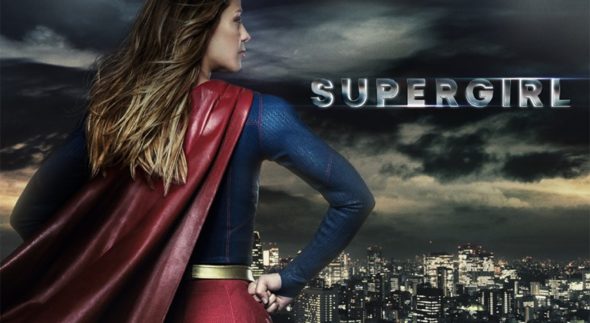 Will Kara’s flight be grounded? Has the Supergirl TV show been cancelled or renewed for a sixth season on The CW? The television vulture is watching all the latest cancellation and renewal news, so this page is the place to track the status of Supergirl, season six. Bookmark it, or subscribe for the latest updates. Remember, the television vulture is watching your shows. Are you?

Airing on The CW television network, Supergirl stars Melissa Benoist, Chyler Leigh, David Harewood, Katie McGrath, Jesse Rath, Nicole Maines, Julie Gonzolo, Azie Tesfai, Andrea Brooks, and Staz Nair. Based on the DC Comics character, the series centers on Kara Zor-El (Benoist), the cousin of Kal-El, i.e. Superman (Tyler Hoechlin). To remain safe from Krypton’s destruction, Kara grew up on Earth as a human named Kara Danvers. For years, she kept her powers a secret. Now, as an adult, she works at CatCo Worldwide Media and also for the Department of Extra-Normal Operations (DEO), a super-secret government organization whose mission is to keep National City – and the Earth – safe from sinister threats as costumed crusader Supergirl. In season five, National City becomes enthralled with addictive virtual reality technologies created by CatCo’s charming-but-secretive new owner, Andrea Rojas (Gonzalo). As Kara uses the power of the press to try to expose this danger, she must contend with challenges from rival reporter William Dey (Nair), renegade Martian Malefic J’onzz (LaMarr), a shadowy organization called Leviathan, and the shocking return of Lex Luthor (Jon Cryer) who, in addition to his plot for world domination, seeks to claim the soul of his sister Lena (McGrath) who is also Supergirl’s best friend.

The fifth season of Supergirl averaged a 0.23 rating in the 18-49 demographic and 837,000 viewers. Compared to season four, that’s down by 36% and 31%, respectively. Find out how Supergirl stacks up against other The CW TV shows.

Will The CW cancel or renew Supergirl for season six? I can’t see the network cancelling this series right now. I’ll keep an eye on the ratings and update this page with breaking developments. Subscribe for free alerts on Supergirl cancellation or renewal news.

1/7/20 update: The CW has renewed Supergirl for a sixth season.

What do you think? Are you glad that the Supergirl TV show has been renewed for a sixth season? How would you feel if The CW had cancelled this TV series, instead?

Hey, guys! Here’s a petition to keep Supergirl going.
https://www.change.org/p/save-supergirl
All we have to do is sign and get all our friends and families to sign, as well.

They better renew it for another season it was my favorite show. I cannot believe they are ending this programming show after their last season season 6 I just I’m going to go back and watch PBS shows and watch barney and friends.

I dont want it canceled either because I love this show too.

Love supergirl but could leave out the romantic intrusions.
Look forward to season six

thank you for a season six i will be looking forward to it.

They should turn Episodes 20-22 into Episodes 1-3 for season six.

So please renew Supergirl the show

Don’t cancel Supergirl..
I love that show..❤❤❤❤
I have seen every episodes from season 1 to season 5 on HBO NORDIC…
I follow the show every week on HBO NORDIC..
I don’t wont it to be canceled..
I want more seasons & episodes
I also like the show..
Don’ t you dare cancel that show…
Show some respect…
I am a huge fan of Supergirl the movie (1984) & the tv show (2016) from Norway …
How dare u cancel one of the Greatest show of all time….

they did renew it

Love all Marvel and DC series; want more… But, how are they going to deal with Melissa Benoist’s pregnancy??? BTW; LOVE IT, when on screen lovers become real… ^5 Chris Wood and Melissa Benoist (there is life after…).
I guess it would be too funny to see a pregnant supergirl flying, LOL.
Well, whatever they come up with, we will be there.
Side question, does anyone else feel a Justice League spin off coming from the Netflix cross-overs??? Just a thought…

Please renew! This is the only show that I will watch. Every season is amazing, and I know it doesn’t please everyone, but this show has some very good actin and heart to it that others shows don’t. And what’s more is it’s hard to find a tv show where I cannot guess turns in the plot or kinda get some idea of what’s going to happen, but I am always in the dark with this show. It also always stays within character for the show, it doesn’t go on completely crazy tangents like other shows I have watched. Please… Read more »

The best tv show out!!! melissa benoist has took this show to new heights she’s amazing as supergirl it would be catastrophic if it ever got cancelled shows always have ups and downs in ratings doesn’t mean it will or should be cancelled personally I’d be gutted it’s my favourite show #istandwithmelissa

This is no longer Supergirl and the ratings drop for the second episode of season 5 reflect this. Without a drastic change of direction there is no reason not to expect this to be the end of the show.