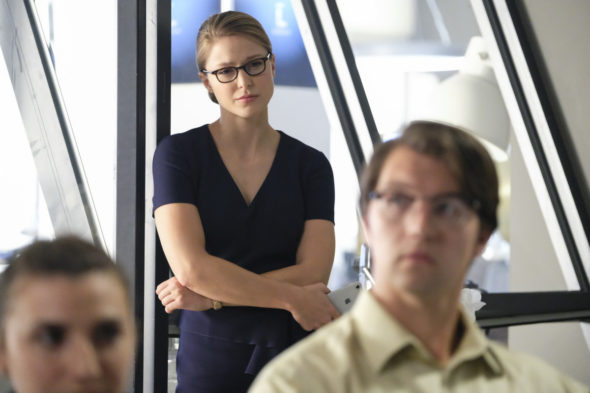 Is Kara still watching over National City? Has the Supergirl TV show been cancelled or renewed for a fifth season on The CW? The television vulture is watching all the latest cancellation and renewal news, so this page is the place to track the status of Supergirl season five. Bookmark it, or subscribe for the latest updates. Remember, the television vulture is watching your shows. Are you?

A DC Comics-inspired action-adventure drama airing on The CW television network, Supergirl stars Melissa Benoist, Mehcad Brooks, Chyler Leigh, Jeremy Jordan, David Harewood, Katie McGrath, and Jesse Wrath. The series centers on Kara Zor-El (Benoist), the cousin of Kal-El, i.e. Superman (Tyler Hoechlin). To remain safe from Krypton’s destruction, Kara grew up on Earth, as Kara Danvers, a human. For years, she kept her powers a secret. Now, as an adult, she works at CatCo Worldwide Media and also for the Department of Extra-Normal Operations (DEO), a super-secret government organization whose mission is to keep National City – and the Earth – safe from sinister threats.

The fourth season of Supergirl averaged a 0.35 rating in the 18-49 demographic and 1.21 million viewers. Compared to season three, that’s down by 32% and 34%, respectively. Learn how Supergirl stacks up against the other CW TV shows.

Will The CW cancel or renew Supergirl for season five? Sundays is a new night for The CW and, as expected, the ratings are down. The series is still doing well enough to be renewed so I predict it will return for a fifth season. I’ll update this page with any new developments. subscribe for free updates on any Supergirl cancellation or renewal news.

1/31/19 Update: The CW has renewed the Supergirl TV show for a fifth season. Details here.

What do you think? Are you glad that the Supergirl TV series has been renewed for a fifth season? How would you feel if The CW had cancelled this TV show, instead?

I’m legitimately terrified. Supergirl has been my dream since I was thirteen. It’s the reason I’ve found confidence in myself and it’s taught me so much. I dream of being on the show one day once my acting skill grows, but I’ve been told in ways that it’s just a childish dream. I really hope the show doesn’t end because even for the ways the ratings have gone bad, I don’t hate supergirl because I could never hate it.

After the premier it should have been canceled. Better go out well than drive it into the ground. Season 5 is no longer Supergirl. It is a spinoff or reboot.

I hope there will be a fifth season of supergirl I would hate it if supergirl ended way to soon I think supergirl should get renewed for another season and I hope to see more crossover..

I hope it does get cancelled. The writing is getting extremely trite and they are trying to hard to bang people over the head with politics instead of knocking off bad guys and such. Supergirl herself is too mamby-pamby and honestly – the show is going downhill rapidly and just plain boring. Yawn!

I hope they keep it on because the show’s really cool.

Well if it is cancelled next year due to poor viewer numbers it’s hardly surprising. When you consider the thinly veiled political digs and identity politics nonsense, instead of actual good story telling with good writing!

Ever read a comic book? They have been political from the very beginning.

And those comics FAILED!

Supergirl needs a season 5 so can bring back Maxwell Lord agin !

Supergirl is the coolest most exciting action packed super entertaining hit television series currently on television by far the cast/crew of supergirl/everyone in the supergirl production office have done outstanding work on the show both the cast/crew of supergirl in front of/behind the camera as well as everyone in the supergirl production office behind the scenes who work w/the CW to promote the show supergirl should be renewed for a 5th season w/out a doubt!!!!

You must have watched in the multiverse lol. I wish i could get the supergirl show that was as you say…. But instead im on earth 1 🙁

It’s bad when seasons 2, 3, and 4 have only had one good episode each. The show is close to its end. Batwoman should replace this show.

Batwoman needs a mercy cancel now. They just gonna do the same crap they did with Supergirl. No thank you.