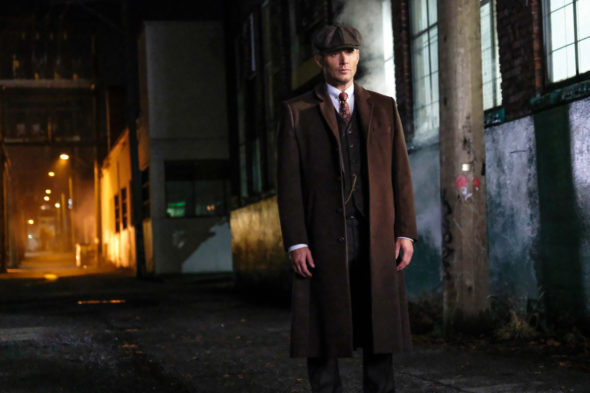 Is the Winchester family business still up and running? Has the Supernatural TV show been cancelled or renewed for a 15th season on The CW? The television vulture is watching all the latest cancellation and renewal news, so this page is the place to track the status of Supernatural, season 15. Bookmark it, or subscribe for the latest updates. Remember, the television vulture is watching your shows. Are you?

Supernatural season 14 kicked off with Sam recruiting everyone to help him track down Dean, and since he’s possessed by Michael, he could be anywhere. Meanwhile, Castiel meets with an unreliable source and finds himself in trouble, and Jack is trying to cope as a human, since his grace was drained last season.

The 14th season of Supernatural averaged a 0.41 rating in the 18-49 demographic and 1.44 million viewers. Compared to season 13, that’s down by 26% and 15%, respectively. Learn how Supernatural stacks up against the other CW TV shows.

As long as the ratings more or less hold, I expect Supernatural will be renewed for season 15. That is, unless the stars want out, or the parties fail to come to terms on money and/or scheduling. This year, the show only got a 20 episode order, to give Padalecki and Ackles some extra time off. They may be feeling like it’s time to let go and let Chuck. Only time will tell. For now, I’ll keep an eye on the Nielsens and update this page with breaking developments. Subscribe for free updates on any Supernatural cancellation or renewal news.

3/22/19 Status Update: Supernatural will end with season 15 on The CW, next year. Watch the cast announce the news and get the details here.

1/31/19 Update: The CW has renewed the Supernatural TV show for a 15th season. Details here.

What do you think? Is season 15 the right time to end the Supernatural TV show? How long would you have liked to see this CW TV series run?

I was hoping for at the very least 20 seasons. Evil never ends, there are many stores still left to tell. Maybe the cast and crew need a year off as a long brake. Then back to work hunting monsters.

I wish it would last as long until the fighting ends and Sam and Dean are happy.

When does seaon 15 start? I have watched this show from the very beginning!

When supernatural ended in the spring of 2020 is there the be any new show coming to Thursday night at 7 and 8 pm I hope Stargirl will take the place of supernatural in the fall of 2020 or Superman or both of them..

I have never loved a show as much as I do Supernatural! While the news of season 15 being the last season was a bitter pill to swallow, I knew that things were drawing to an end. Jared and Jensen both have families that they want to be with as evidenced by season 14 having only 20 episodes. There isn’t a better reason I can think of to bring things to a close. I’m looking forward to seeing what unfolds in our last season and wish all the best to the absolutely wonderful actors who brought our characters we love… Read more »

If they do decide to cancel supernatural they better end it right. If they cannt make a full season make a big deal movie I say to end to perfect with a happy satisfaction ending and make everyone happy.

Facts!! This show makes everything interesting..I wanna learn what these characters are in real life…eve wasn’t the first women which I read up on reading Enoch. But you guys brought her to life, and darkness is No joke in love with dean lmao really? Castelle is so important and the devil’s boy has come along way.

So when will last show air on cw

I have seen every episode and it will be hard to say goodbye to when they go off.

I too have watched every episode of Supernatural…but I imagine for actors, after working on the same show for 15 yrs. the grind of the same show may grow stale. They may want to pursue other acting opportunities that are fresh and challenging?