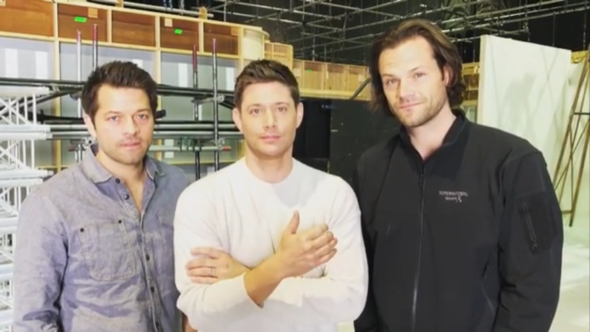 It seems the Brothers Winchester will be taking exit 15. Today, Jensen Ackles, Jared Padalecki, and Misha Collins released a video confirming that the 15th season of Supernatural will also be its final outing. That’s right; it’s official. The Supernatural TV show on The CW will end with season 15. Fans who have been with it from the beginning may remember sweating out the “cancellation or renewal” question every spring in the show’s early years and marvel that we’ve come this far in a black 1967 Chevy Impala. Take a moment to take it all in, then watch the two-part announcement, below.

Supernatural to End with Season 15

As they talked about approaching the “grande finale,” the “boys,” which was once a more apt term, all agreed to save the emotion for Supernatural‘s 15th and final season on The CW. Ackles made sure to include a tribute to creator Eric Kripke, and the Supernatural family. It’s pretty clear from their video that this was a creative decision, rather than one of network caprice. It’s also nice that they’ll get a final season to end the show on its own terms. Supernatural received an early season 15 renewal on January 15, 2019.

Ackles, Padalecki, and Collins all tweeted out the video to fans, as well. #SPNFamily, indeed.

The 14th season of Supernatural is averaging a 0.42 rating in the 18-49 demographic and 1.46 million viewers. Compared to season 13, that’s down by 23% and 13%, respectively. Even with that drop Supernatural is still the second highest rated scripted CW TV show. Here’s hoping that it goes out on a high point.

What do you think? Are you still watching the Supernatural TV show on The CW. Is season 15 the right time to end it, or would you watch through season 16 and beyond?

One of the best shows ever on television in my life. I will miss supernatural. Selfishly I feel they could have made five more years of highly entertaining episodes. I would like to thank all the writers, actors, and wish everyone the best in their future endeavors.

I love the Supernatural Show and will miss it terribly. I understand these fellas are ready to move on to the next chapter in their lives outside of the show, but the show will be missed.

thanks everone envolved, I sure would a Movie for the total ending, You people are too smart to let it go. keep on keeping on

i would to see another season supernatural, It was one hell of a ride, One more season would greatly appreciated, Keep fighting boys