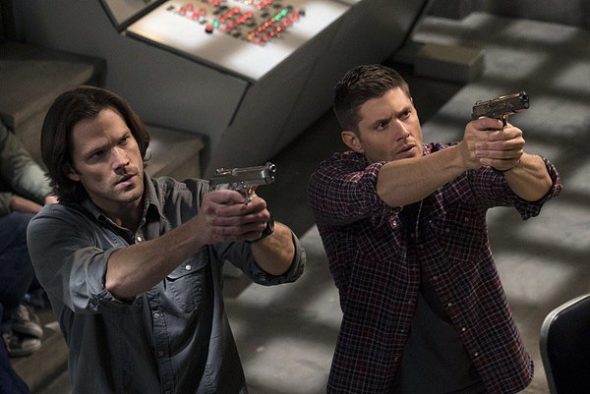 Considering Sam and Dean Winchesters’ luck, it seems fitting that their Supernatural TV series would end with season 13. Stars Jared Padalecki and Jensen Ackles want to take it even further, though — to episode 300 — which would be 13 episodes into a 14th season! The CW show also stars Misha Collins and Mark Sheppard.

It’s not just the leads who have their sights trained on the big 3-0-0. New co-showrunner and longtime EP and director Robert Singer feels the same. Here is more from EW:

Episode 300 would take the show 13 episodes into season 14, or all the way through season 14 if they did a shortened season, something Ackles and executive producer Bob Singer have talked about as a potential option. “We talked about wanting to be able to know when our end was, and if it was to be, let’s say, 300 episodes, we could tell a 13-episode story,” Singer says. “I think it would be bad for this show to just ride off in the sunset without a finale. I think we’ve earned that. I don’t know what that finale is, but we’d certainly like to do one.”

Reportedly, CW President Mark Pedowitz is a Supernatural super-fan, and as has said as long as the ratings hold, they will make the show as long as Ackles and Padalecki want to. When the boss feels that way, and 12th season of a drama is about to premiere, 14 seasons sounds less far-fetched. EW reports:

However, Ackles and Padalecki don’t want to get too ahead of themselves. If Sam and Dean have taught them anything, it’s that Death can be lurking around every corner (and he’s usually eating pizza). “If we don’t make it to 300, I think Ackles and I will both be truly bummed,” Padalecki says. “When we get to 300, I think Ackles and I will think it might be time to say bye. There’s a chance that changes, but we certainly do not take it for granted that we’re going to make it to 300.”

Goal numbers aside, both actors are still quite engaged with their characters and the larger story. Padalecki told EW:

I feel like if I ever show up to set and I feel like I don’t care, or if I feel like he doesn’t care, then that’s the canary leaving the mine. To this day, I have not really ever sensed that from myself or him… They’re paying us to bring that little bit of magic to what they wrote, and I still feel that magic today. The day that I don’t feel that magic will be a very sad day, and I hope that day never comes. I’d like to get to 300 before that day comes.

What do you think? Are you still watching the Supernatural TV series? How long do you imagine it will run on The CW? Can it make it to season 14?

Omg I just watched the last episode of season 14 and I will never be the same if this show ends! Please come out of that grave yard alive!!!!!!!!

We get this later in the UK and have just come to the finale of Season 13. I cannot wait for season 14 to begin. I love this show so long may it continue! Sam and Dean rock!!!

This is one of the good things in this world of so much bad things. Look forward to each new show. Every thing a great show is made of.

Same here, we make our own hell on earth so it’s great to see the battle of good against evil portrayed as we have been taught about heaven and hell. Plus all the characters are believable brilliant acting, my fave is Cas. Micha plays him with ignorant innocence of a child and the vengeance to protect his adopted Winchester family and the devils own son Jack. I’ve watched the show from episode 1 & look forward to more seasons past 14 if the powers that be will. The battle of good and evil will never end but when good wins… Read more »

I’d love to see it make it through 15 seasons, although that may be stretching it. The fact is that the actors are still passionate and the writers have not run out of ideas.

I’m not ready to let go of the show. I still watch the old and new. I’m not in “target audience” being in my 60’s. They should consider the fact that there are a lot of us who watch. The teens are not the consumers and advertisers should understand that a show like this crosses the divide to many adults. My son and his sons also watch. I wish it could go at least 15 or 16 seasons. They both are aging extremely well. So why not?
On another note BRING BACK CROWLEY.

I love this show! I have seen season 1 – 12 six times through and I’m still watching it on TNT! Please, please, please do a season 14 and beyond if possible! I think Bobby Singer is the greatest of all time! I am in my 50’s and your show makes my morning! I cannot imagine going through the fall without you and Supernatural on CW!!!

Well I agree the show has a magic and they bring it. At this point I want to see them pass episode 300 so us fans will do our part! I watch religiously. Thank you CW for bringing us this fantastic show!