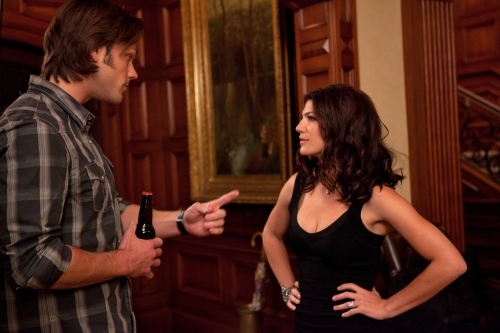 Supernatural is getting closer to its end, and the series will the return of the wives of Jensen Ackles and Jared Padalecki before the series ends. Genevieve Padalecki and Danneel Ackles will appear in an upcoming episode of the series, per Entertainment Weekly.

The CW revealed the following about the episode:

“A search for the one thing that may give the Winchesters an edge against God leads Sam (Jared Padalecki) and Dean (Jensen Ackles) to Jo’s (guest star Danneel Ackles) door and to a secret that may have died with Ruby (guest star Genevieve Padalecki). Meanwhile, Castiel (Misha Collins) asks Jack (Alexander Calvert) to do the unthinkable to help the brothers in their quest.”

Fans do not have long to wait for the return of Ruby. The episode, titled “Destiny’s Child,” will air on March 23. Supernatural returns with new episodes on a new night, March 16.

What do you think? Are you excited to see these special guest stars return to Supernatural before the series ends?

My favorite show is going away and I will be sad. But, the last 2years were not my favourites. Glad to see new shows with these two guys. Best of luck. Thanks for the memories. AmyG.

I would rather see it continue! If they wanted their wives on the show, I could have lived with that. But no Supernatural again, EVER? Heart Breaking! Leaving CW with shows that are either for teenagers or lovers of westerns! I am neither so sayonara CW!

That’s sad to hear that Supernatural is ending. But “EVIL” isn’t ending which is cool. Would prefer both shows to continue but at least one made it. Still miss Rowena and her “HELLOOO BOYYSSSS”

I so agree with you! Rowena came to be my 4th favorite character on Supernatural after the Winchester boys, and Castiel. She was at once outrageous, hysterical, hateful, and wonderful. The woman who played her should have gotten an Emmy! I, too, love Evil. Happy to know it isn’t ending. But it’s not on CW. There is nothing left for thinking adults on the CW. They have completely caved to the teenagers. Good luck, CW!

I love this show it sad to see it gone

I am very excited to see the guest stars. My son has been watching it for a while so I started watching with him and now I love supernatural and I hate to see it end.

The demon Ruby coming back is fine, but it’s inconsistent with the way Supernatural works that all these years later the demon would be in the same vessel. That vessel would be extremely decomposed – Sam & Dean stabbed her 11 years ago! I’m curious as to how they plan on explaining that!!

I’m actually looking forward to seeing Genevieve Padalecki return as her character Ruby. I think she’s such an amazing woman. I follow her blog and I loved when she took over as the demon, Ruby and I’m really looking forward to her return probably because she’s been gone for such a long time.
I’m always happy to see Daneele Ackles play her character Jo. She is an amazing actress.
I love seeing her play opposite her husband.

Bri
Reply to  Laurie A Young

Agreed! I also think it’s really cool how (spoiler alert, for some, I guess, lol) in the earlier seasons, Dean and Sam were Michael and Lucifer’s vessels, respectively, and now their actual wives “match up” with those roles with Jo being an angel and Ruby being a demon. So interesting! Now we just need Misha’s wife to be cast as an angel or something and we’re golden! Lol