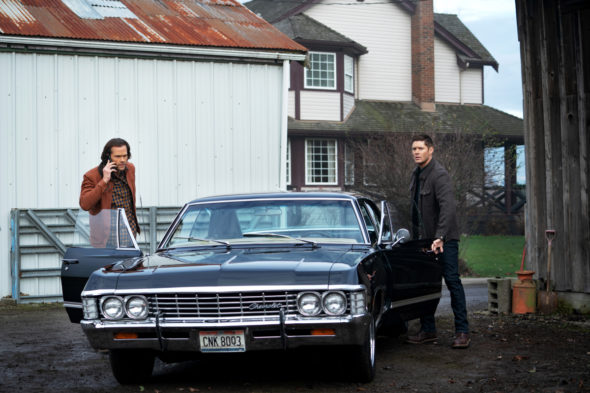 Supernatural is getting ready to wrap production on its final episode, and series star Jensen Ackles will be taking home something very special once the director calls “cut”. The actor is being given “Baby”, the black 1967 Chevrolet Impala that is used in the series and is beloved by his character, Dean Winchester.

Ackles said the following about the special takeaway from The CW series:

“I begged and begged and pleaded for years, but I finally got it this year. They’re going to let me drive home the Impala.”

As for star Jared Padalecki, he’s also taken some mementos home from his time on Supernatural, but he did not reveal what those items are. He said the following, per Digital Spy:

The series returned to production last month after COVID-19 put a halt on the filming of the final two episodes of the long-running TV show. The last seven episodes of the series start airing on October 8th on The CW.

What do you think? Are you surprised Ackles is taking home this prized Supernatural item? What would you take home from this CW series?

Of course Jensen gets the car. That IS his baby. And as he drives off into the sunset “Wayward Son” plays on the radio! Perfect! Good job Jensen!!

Jared gets a new TV series (The “Walker” reboot) and Jensen gets the car…. 🙂 (Surely they have to have more than one car for the series….)

Well I honestly would love to have the 1967 Chevrolet Impala but that will never happen !!!!! Jensen Ackles AKA Dean Winchester knows how much the car means to him and the show it was always his baby so way to go Jensen nice they let you take the car home you are one with it !!!! SO SORRY to see Supernatural go it is an AWESOME dhow and I watched every show so alas all AWESOME things have to come to an end so GOOD LUCK IN YOUR FUTURE GUYS !!!!!!!!!!!!

Well I thought it was a great show I finally get interested in the last 7or 8 seasons decide to cancel it that’s too bad a lot of people really enjoyed watching it . I for one Would really love one of the impalas but that not going to happen and I know that I would love to see you continue or even meet you guys that would be great

The Impala, you have to be a true fan to understand what this car means to the brothers and their family!

Would love to have one of the Impalas. But since those are gone, some of the Tiffany style desk and floor lamps. Great show, only a month to the end.

That’s cool as hell–if anybody deserves to keep it, “Dean” does! 😉

Connie
Reply to  The TV (Guy)de