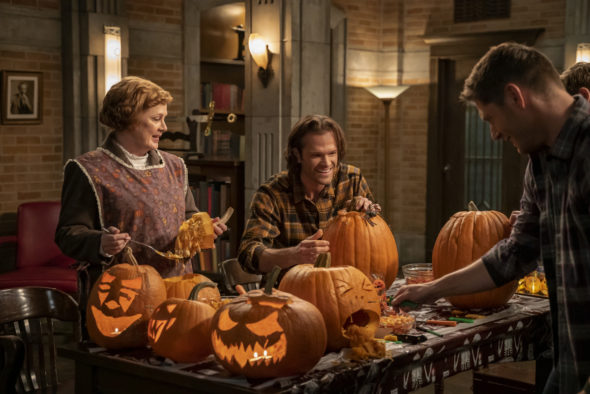 Supernatural fans are less than a week away from the return of the long-running series as it heads towards its finale. There are only seven episodes left of the series, and a new recap has been released, along with details about the next three episodes. The intallments will include a flashback episode taking fans back to the younger days of Sam and Dean, played by Jared Padalecki and Jensen Ackles.

The CW revealed the following about the first three episodes out, including its October 8th return:

“Last Holiday”
MAKING UP FOR LOST TIME – Sam (Jared Padalecki) and Dean (Jensen Ackles) discover a wood nymph (guest star Meagen Fey) living in the bunker who is determined to protect her family, at any cost. Eduardo Sanchez directed the episode written by Jeremy Adams (#1514).

“Drag Me Away (From You)”
FLASHBACK TO A YOUNG SAM AND DEAN – Sam (Jared Padalecki) and Dean (Jensen Ackles) are asked to investigate the murder of a childhood friend, calling them back to a motel from their past and perplexing the brothers with a case they thought was solved a long time ago. Amyn Kaderali directed the episode written by Meghan Fitzmartin (#1516).

Supernatural decided to pull new episodes of the show off the air shortly after the pandemic shut down production because the cast and crew were unable to finish some of the final episodes.  The cast went back to work on the series in August and wrapped production last month.

Check out the recap for already aired season 15 episodes of Supernatural below.

What do you think? Are you a fan of Supernatural? Are you excited to see how this long-running series ends on The CW?

I understand why they want to stop the show. That said, I watch it since first season and I would watch this show until I die. I would be happy if there were like 50 seasons : ) That show became over time a need. Like water, food and the other thing. I will starve from lack of Supernatural seasons. Thank you all team for such a wonderful ride. Don’t be shy to come back… Love you all. From Montreal.

Supernatural is probably one of the great iconic shows ever seen by the world. I realize that it needed to end as fresh stories, at this point, are hard to write. I have been a HUGE fan of the Winchester boys and Misha Collins and Jim Beaver since the show began. I still watch Supernatural on Netflix (one of the only reasons I still have Netflix) whenever I need a Winchester fix. I can’t say exactly why this show grabbed me except the off screen cameraderie is so evident onscreen, something I have rarely seen in a television series, is… Read more »

Any dates for it being shown on E4 in UK please . Thanks

I am very happy to see that Supernatural is coming back on but the super huge fan of Supernatural I am and sad to see it end !!!!!!!! Well it was AWESOME while it is showing and I never missed a show and hope they have a wonderful life as long as the can !!!!!!!!! THANK YOU FOR MANY HOURS OF ENJOYNENT !!!!!!!!!!!

I have been a big fan since the beginning. I have the first shows on VCR tapes in storage, couldn’t wait to get home from work at midnight to watch it on Friday morning. Had all of season 15 saved on my DVR until it broke and had to replace it. The crew had the motel rooms and run down houses in the Midwest to a T. My husband and I drove truck for a living and we stayed in motels almost that bad. Thank you to the actors, writers and all the crew over the last 15 years. Yes,… Read more »

I’ve been binge watching the show from season one episode one getting ready for the ending. Going to miss this show.

First started it popular tv show not anymore thank goodness got cancelled been on too long the CW running program ever on network.