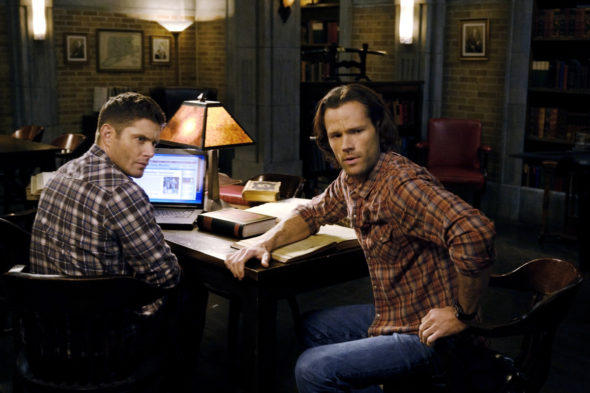 Supernatural fans had more bad news. The series just started airing on Monday nights, as it heads toward its finale. With this being the final season, a production shutdown has fans worried already. Now, the series is being pulled off the air due to the shutdown. The next four episodes of the series have been filmed already, but they still need to go through post-production with sound effects, editing and more needing to be done still.

Andrew Webb posted about the unannounced hiatus on his Twitter on Monday. He shared the following:

(Due to the shutdown, this will be our last episode for awhile. Stay well, stay safe, and we’ll see you on the other side.)

(Clarification: We have filmed through episode 18, however our visual effects and sound departments have closed because of the outbreak. So, right now, the episodes can’t be finished. However, have some special treats coming along the way– to help us all get through this.)

Production was shut down on The CW series with two more episodes left to film. Fans have been worried that the shutdown will cause the series to end without a proper finale. Webb shared the following to ease fan concerns”

(And yes, we, the CW, and Warner Bros fully intend to return and finish the series. It’s not a matter of “if”, it’s a matter of “when.”)

The next episode of Supernatural is titled Last Holiday:

“Sam (Jared Padalecki) and Dean (Jensen Ackles) discover a wood nymph (guest star Meagan Fey) living in the bunker who is determined to protect her family, at any cost. Eduardo Sanchez directed the episode written by Jeremy Adams (#1514).”

What do you think? Are you upset the Supernatural is going off the air until production can resume?

I’m very sorry to hear that they had come to the end but appreciate the years as entertainment they provided me look forward to seeing the last two episodes. Thank you & good luck in your future endeavors to the entire cast and behind the scenes staff.

I completely understand why you are doing this. It would be nice to have some re-runs of season 14 and 15 to watch until we all can start watching the new shows again, but I suppose that’s up to the network to decide that.
Much love to everyone out there and take care everyone!!

Yes it’s upsetting this season seems so split up however better safe then sorry. What would be nice atleast play season 15 repeats this way we as fans still get something. Again as long as their safe that’s #1 looking forward to season 15 conclusion

Mad mad mad, waited over a month, then only 2 episodes then I gotta wait again. I need my Supernatural fix dude!

I’m DEVASTATED!!!! I’ve watched the series from Season 1 to the last Season probably 20 times!!! This is the only TV I watch! I’m in LOVE with Supernatural, in LLLOOOVEEEE with DEAN… and Sam, lol, and in LOVE with ALL of the other characters. This show is simply BRILLIANT!!! All of the inside jokes, witty, witty, witty! This show is PERFECTION. It cannot POSSIBLY end without a SOUL-SHAKING finish! They HAVE to finish it right!!!!

Noooooooooo! I was so hoping it was filmed already and would air as normal.
I live in Australia and always read the recap from U.S before I watch it here.
It’s the only show I can never ever miss ever.
I’ve loved Dean since he was Eric on days of our lives.

Please take care I am looking forward to the return of Supernatural and wish everyone family and friends all the best. Put your trust in Gods hands and believe in one another, we are all in this together and we will come out stronger in the end.

I don’t like it, if they have filmed more shows why have their special effects, etc. not kept up? Not much we can do until our Coronavirus (Zombie Apocalypse) is over.

It’s a little surprising that such a huge production would be completely unable to adapt but I guess it is. Blizzard Entertainment managed to get an alpha build out after moving their entire operation to work from home. I’m honestly surprised that most TV production can’t be done from home on a souped-up Mac Pro etc. The acting and shooting certainly not–but that’s been mostly done.

I guess it’s because of the virus. That they are shutting down for a little while. but that’s okay stay safe and well

Been waiting 15 years. A few more months until the series finale won’t hurt.

Seriously?! Just show the others you’ve completed on go on!! If there’s 2 other shows already taped…then show them! Other production companies are providing their shows , why can’t you all??! Understand about onea that were in production, but dragging out the ones you already shot is BS! This is last year so just provide us home bound folks a little more happiness, ehh?!