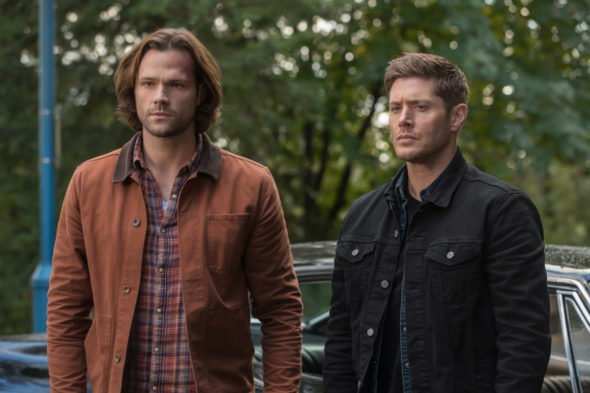 How will you celebrate the final season of Supernatural? Recently, CW boss Mark Pedowitz spoke with Variety about the network’s plans for the last episodes of the TV show’s 15th and final season.

The long-running series follows the Winchester brothers — Sam (jared Padalecki) and Dean (Jensen Ackles) — as they cross the lonely and mysterious back roads of the country in their 1967 Chevy Impala. The cast also includes Misha Collins and Alexander Calvert.

Like many other TV shows, Supernatural shut down production on its final episodes in March because of the ongoing COVID-19 pandemic. The The CW series still has two episodes left to film, and network boss Mark Pedowitz says he plans on celebrating the show’s final episodes with an event in either September or October:

We’re going to take the negative of what happened and turn it into a positive. We plan to make an event out of it.”

What do you think? Are you a fan of Supernatural? How do you want the series to end?

I understand the covid19 still going on and the safety of all cast are very concern indeed. I do wish the Supernatural show will come back on Season 16 later after all of these pandemic is gone. It is a very interesting show with learning, educational, emotional and dealing with the eye opening supernatural event with our realistic world. Right and wrong, evil and angel, but God is the central of this show for sure. Thank you so much for all the seasons, and special thanks for Sam (Jared Padalecki), Dean (Jensen Ackles), CW Boss Mark Pedowitz and all other… Read more »

Been here since the first preview of the series aired on WB . Saw the potential in this show. I want the show to end where it can pick back up if the guys decide that they miss it and it creates a spinoff of the women . I go back to the original idea that Dean sees himself and his brother spending time on a beach , sipping on cold ones. We’ve had the family dinner several times. Plus, the driving off into the sunset. This needs to be epic. This show can’t have a ending . Because the… Read more »